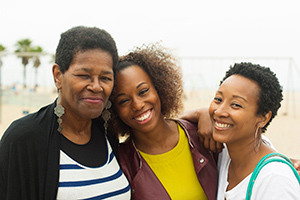 Gender bias in healthcare, though, continues to affect our understanding of these differences. Women experience higher levels of skepticism or dismissal of their symptoms, higher levels of misdiagnosis, fewer treatment options when they seek critical medical attention, and there is a continuing bias in scientific studies.

In addition, girls are more likely to have a co-occurring condition, including anxiety, depression, bipolar disorder or conduct disorder, and are less likely to be referred for evaluation and treatment.

Gender bias at work and play, and life in general…

Gender bias is not a new issue. It is complex and affects pretty much every part of life.

Social expectations about gender roles affect bias—beliefs and prejudices—and influence behavior. Likability and being nice are an important part of advancing a career—if you’re a woman. And women who are assertive and speak directly are seen to be hysterical and less competent, which negatively affects how others perceive their value.

When it comes to healthcare, there are several theories on why there are differences for women compared to men: unconscious prejudice, underestimating or misunderstanding a woman’s risk for certain health conditions, differences in how women describe their symptoms compared to men. Whatever the reasons, acknowledging gender differences can lead to better health outcomes for both women and men.

The role of hormones in ADHD

Recent research has demonstrated that hormones play a role in ADHD for women and girls.

“We now know that the brain is a target organ for estrogen, where it impacts cognition, mood and sleep,” Dr. Littman says.

Women, and girls who have gone through puberty, have monthly fluctuations in levels of estrogen, progesterone, and testosterone. These sex hormones play a key role in reproduction, sexuality, emotions, and overall health and wellbeing. But according to researchers Ronit Haimov-Kochman, MD, and Itai Berger, MD, most studies have considered monthly changes in sex hormones a nuisance to be controlled for, or have ignored it completely by focusing exclusively on male subjects.

A growing number of studies show that sex hormones play a role in regulating communications between brain cells and can negatively affect executive function. Rather than avoiding the monthly fluctuations of hormones, Dr. Haimov-Kochman and Dr. Berger suggest new studies should focus on the subtle fluctuations and combinations of hormones that influence emotions and executive function to understand the role of hormones in ADHD.

The endocrine system is comprised of multiple glands that produce different kinds of hormones. It is an interconnected system that is slow acting, with long-lasting impacts.

“The investigation [of] the role of estrogen, progesterone, and other sex steroids has the potential to generate new and improved diagnostic and treatment strategies that could change the course of cognitive-behavioral disorders like ADHD,” Drs. Haimov-Kochman and Berger say.

What you can do:  Hormone balance and ADHD symptoms

How did we get here? What can a woman do to better manage the disadvantage she has when it comes to the appropriate diagnosis and treatment of ADHD? Although the disadvantage affects other medical issues, how do women’s hormones affect ADHD symptoms?

Hormone regulation is affected by several factors, including psychosocial, environmental, and physiological factors. For girls and women with ADHD, normal monthly fluctuations of hormone levels—as well as major hormonal changes such as puberty, perimenopause and menopause—can significantly impact ADHD symptoms.

Most treatment regimes are based on the successful treatment of school age boys, Patricia Quinn, MD, writes in AD/HD in Women: Do We Have the Complete Picture? “Hormonal fluctuations and the influence of estrogen on the brain are not even considered, much less addressed,” she writes.

Dr. Quinn advises girls and women with ADHD to recognize their periodically changing hormones can have a significant effect on their ADHD symptoms. In order to identify the influence of hormones on your ADHD, keep a log of your menstrual cycles along with a daily log of your ADHD symptoms and share the data with your doctor, to support an optimized treatment regime.

Many girls and women experience challenges related to ADHD, whether due to difficulty with diagnosis or symptom management. Recognize that ADHD is a brain-based disorder with increasing evidence that it is strongly impacted by hormones. Take the time to educate yourself and find good healthcare providers who will listen and help you find the best treatment options for your unique symptoms.

In Part Two of this series, we will look at how puberty affects girls who have ADHD, and strategies they can use to more effectively manage their symptoms. In Part Three, we will look at what women with ADHD can expect as they experience hormonal changes with pregnancy, perimenopause and menopause.

Have you noticed a variation in ADHD symptoms throughout the various points of the month?  What is this like for you?

ADHD symptoms are not the same from one day to the next for many women and with good reason. The natural fluctuations in female hormones have a direct effect on executive function. In Part One of this three-part series, we explore the role of hormones in ADHD, and why many girls and women experience challenges with managing their symptoms.

The Essential Role of Teachers in Managing ADHD