Is It Clutter or Hoarding? How to Help 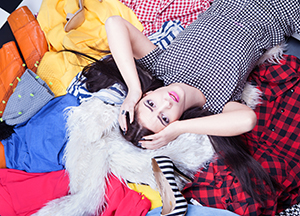 Clutter seems to come along with the experience of ADHD. Organizing belongings, keeping up with housekeeping, and maintaining the flow of family life can get complicated because of ADHD symptoms. Many families accept that clutter is just part of the equation.

But when is clutter not just clutter, and instead the sign of a much bigger problem? In a few situations clutter can evolve into hoarding disorder, placing the health and safety of the affected individual and sometimes the people they live with at risk.

“People with hoarding disorder excessively save items that others may view as worthless,” according to the American Psychiatric Association. “They have persistent difficulty getting rid of or parting with possessions, leading to clutter that disrupts their ability to use their living or work spaces.”

The American Psychiatric Association estimates that hoarding disorder affects 2 to 5 percent of the general population.

“There are several ‘lookalike’ conditions and circumstances that are commonly mislabeled as hoarding, including collecting, cluttering, and chronic disorganization,” says Debbie Stanley, LPC, NCC, CPO-CD in ADHD and Hoarding: What It Is, Why It Happens, and How to Help without Harming from Attention magazine. “Understanding each of these is crucial to understand how ADHD fits into the hoarding picture.”

“Cluttering is another behavior typical in folks with ADHD. Leaving items out as visual cues is a common way of compensating for an unreliable memory or inadequate time-management system, but to the untrained eye it can resemble hoarding,” she says. Seeking a professional organizer and working with a coach can help address the problem. Unfortunately, and especially due to popular TV shows focusing on hoarding disorder, well-meaning family and friends can misunderstand the problem.

“Chronic disorganization, also common with ADHD, frequently results in cluttering that the person is hard-pressed to correct, further increasing the odds that she or he will be misconstrued as hoarding,” Ms. Stanley says. “In a nutshell, hoarding is not about ‘the stuff;’ it’s about the person’s attachments to the items. With appropriate assistance, a chronically disorganized person who is not burdened with emotional attachments to the belongings can usually participate in the development of an organizing system and choose a meaningful percentage of items to be discarded. Conversely, a person who hoards will often resist large-scale rearrangement of belongings and will have difficulty discarding more than a token number of items, even when, in general, he or she recognizes the excess and wants to reduce it.”

Helping a person struggling with ADHD and a hoarding disorder, or either condition separately, is not as simple as throwing away unneeded items or organizing for the person, she warns. Doing so creates even deeper distress.

“If the person has ADHD, the potential for overwhelm during this process is that much higher,” she says. “Developing a clear plan based on the client’s priorities and carrying it out on a realistic schedule (a year, for example, not a weekend) is far more likely to result in lasting change. “

So what can you do to help a friend or loved one struggling with an overwhelming amount of stuff? Read more to learn how to help.

Have you had a friend or family member affected by hoarding? Share your experience.

Landmark Study Will Shed Light on ADHD and Brain Development

Q&A: Can I Still Drive After Taking ADHD Medication?

Is It Clutter or Hoarding? How to Help