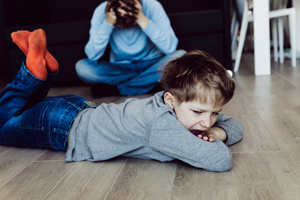 Question: My little boy will be turning five at the end of the summer. He’s all over the place! He gets wound up easily, especially in the later afternoon, and doesn’t listen when he’s spoken to. He also tends to be clingy and we have a hard time getting him motivated in the morning. We don’t have a family history of ADHD, but I’m wondering if he could have it. PS: He snores a lot for a little guy!

Answer: An evaluation with a specialist in childhood ADHD can help you get an answer about whether your son has ADHD, but several things you’ve mentioned could indicate that he is not getting enough sleep. Most children who are overtired will display overactive behaviors. If they don’t sleep well at night they can struggle in the morning or have meltdowns in the late afternoon.

Sleepiness instead of ADHD?

ADHD symptoms often surface in toddlerhood, though an evaluation is generally not recommended until a child is about 4 years old. This is, in part, because some of the symptoms of ADHD and some of the characteristics of children at this age can overlap. By 4 and 5 years of age, specialists and parents can work closely to determine what is a symptom of ADHD and what is not. Behavioral therapy and parent behavioral training are the recommended treatments for children at this age.

The child in our question displays what looks like hyperactivity. But he also displays indications of an overtired child: difficulties in the morning, meltdowns in the later afternoon, clinginess, forgetfulness and seeming not to listen, and snoring at a young age. We don’t know what his bed or wakeup times are, but a bedtime that’s too late or a wakeup that’s too early can also lead to a child’s becoming overtired.

“The symptoms of insufficient sleep in kids may surprise you,” say the sleep experts at the National Sleep Foundation.  “Poor sleep in children has been linked to behavior problems, obesity, high-risk activities, and other serious issues.”

Children who snore or experience restlessness in their sleep (frequent arm or leg movements), or who sleep in situations that cause them to be awakened frequently, often display symptoms that resemble ADHD symptoms: hyperactivity, forgetfulness, argumentativeness, inattention, or academic difficulties.

“When you’re tired, your ability to control impulses is reduced,” says David Gozal, MD, director of the Division of Pediatric Sleep Medicine at the University of Louisville’s School of Medicine in Kentucky. “With kids there’s also a tendency to stimulate themselves with enormous activity, to try to keep themselves awake.”

Studies have even shown that some children diagnosed originally with mild ADHD were actually not sleeping well and were chronically overtired. Children who snored or had otherwise obstructed breathing while they slept were frequently evaluated for ADHD before they received sleep evaluations. Treating these children for snoring or sleep obstruction could have eliminated an ADHD diagnosis.

“In survey after survey, these kids get [identified] as having ADHD, when in fact all they are is tired,” says Rafael Pelayo, MD, head of the pediatric sleep service at the Lucile Packard Children’s Hospital in Palo Alto, California.

What to do for better sleep and behavior

If an evaluation for ADHD shows the child likely does not have the disorder, or has what the specialist considers mild symptoms, a sleep evaluation may be helpful in identifying the cause of the child’s difficulties. Children who have sleep obstructions need an evaluation to determine whether surgical removal of the obstruction would be beneficial.

Establishing good bedtime routines, and a regular time for sleep, is key. Children and teens need more sleep than adults. Preschoolers, like our little boy in the question at the beginning, need 11 to 12 hours of sleep. If his alarm clock is set for 7 AM, then his parents may need to consider a 7 or 8 PM bedtime. A consistent bedtime routine can improve daytime behavior and family relationships. Pick a bedtime for your little one and stick with it, even if it will disrupt adult activities.

“Establishing and maintaining a bedtime routine is worth the struggle,” says Marie Hartwell-Walker, EdD. “There is so much good learning that can go on during the hour before lights out that it really shouldn’t be missed.”

A basic routine can include putting away toys and belongings, taking a bath, picking out tomorrow’s clothes, reading a short story, and putting on soft music as you tuck in your child. Make the room as dark and quiet as possible, allow him a comforting stuffed animal or blanket, and let him know that you’ll still be nearby.

If your child has trouble falling asleep within 20-30 minutes on a regular basis, talk with his pediatrician for additional ideas to help him sleep at night.

Learn more about sleep and ADHD:

Join the discussion: Does your child snore or have disrupted sleep patterns? Have you found his behavior improves when he gets more sleep?