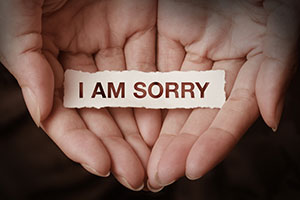 We all make mistakes. And while it might sometimes feel otherwise, that’s not unique to people with ADHD.

“Just by having a human brain, we will make poor decisions,” says J. Russell Ramsay, PhD, co-director of the University of Pennsylvania Adult ADHD Treatment and Research Program and associate professor of clinical psychology in psychiatry at the Perelman School of Medicine at the University of Pennsylvania. Dr. Ramsay is also a member of CHADD’s professional advisory board.

Whether that’s saying something hurtful, forgetting to feed a parking meter, interrupting when someone is talking, or missing a parent-teacher conference, “everybody—ADHD or not—will have mess-ups and goofs,” Dr. Ramsay says. What matters is how you respond to those mistakes.

Marie Paxson says there are two main kinds of actions that call for an apology: when you regret what you have done, and when you regret the outcome of something you have done. Ms. Paxson is a past president of CHADD and a former chair of the Attention magazine editorial advisory board.

An example of regretting what you have done would be sharing with someone else personal information a friend had told you in confidence. For that, Ms. Paxson explains, it’s best to recognize what you did and offer a sincere spoken or written apology:

“I’m sorry that I (whatever you did). I didn’t mean to cause (whatever were the results of your action). It won’t happen again/If I had it to do over, I would (a different action).”

It’s important to show you understand what you did and why it was wrong or hurtful, and how you have learned from it, she says. That is true whether you are apologizing to your partner, your friend, your child, your neighbor, or your boss.

The second category of an apology-worthy event can be trickier. Ms. Paxson gives as an example sending an email to someone close to her in which she shared an opinion that was upsetting to her friend. She still believes in her original opinion, but she knows that there was no reason for her to have shared it with her friend. Her apology needed to focus more the outcome—how her friend felt—rather than defending her opinion or her action.

“It’s best to say, ‘I’m sorry I hurt your feelings; I value our friendship and hope you can forgive me,’” according to Ms. Paxson.

Dr. Ramsay suggests thinking about whether there are areas of your life in which you find yourself doing the most apologetic cleanup, and how you might address those.

Once you have an idea of where you are most often stumbling, consider how ADHD symptoms can be getting in the way. Adults with ADHD often have short-term memory issues, and difficulty with small details or finishing a project. If your stumbles are related to those challenges, look for ways to work around them—such as switching roles with your partner so she’ll handle the recycling and you’ll take care of unloading the dishwasher, since you spend more time in the kitchen. In another area, if you are constantly apologizing to a colleague who has to make corrections to your work, maybe it’s time to think about whether your job is the right fit.

An important part of righting a wrong is the way you do it. Apologizing is saying to someone, “I’m sorry for what I did.” An apology acknowledges what you did and takes responsibility.

Making amends involves taking an action to fix what you did. It is often a correction for a bigger mistake. Dr. Ramsay uses the example that if a friend invited you to be her guest at a concert and you completely forgot, you could reimburse your friend for the cost of the unused ticket. Or if you promised your neighbor that you would pick him up at the train station but then forgot, you might offer to make it up to him by driving him to the airport for his next business trip.

Amends should match the level of the mistake. Many times, people with ADHD feel guilt and shame and then go over the top in cleaning up their mess.

“You might think, I forgot to pick this friend up at the train station once, so now I have to take her to the airport the next five times,” says Dr. Ramsay. What you’re actually telling yourself, he says, is “I let this friend down a lot, so now I’m obligated to go above and beyond.” But you’re not obligated to do that, he explains.

Once you’ve made your apology and have done your best to correct the problem, try to move on.

“People with ADHD can be hard on themselves,” says Dr. Ramsay. “So you make the apology, you make amends, and when the other person says, ‘We’re good,’ you accept that, knowing that you’ve done what you can. You’ll give the other person room to process it and work it through on their own. Be mindful of excessive feelings of guilt or beating yourself up repeatedly for one offense.”

And take time to listen to your partner, friends, family, and colleagues when they explain to you about the repeated behaviors you find yourself apologizing over. Dr. Ramsay points out that in those relationships, you get continuous feedback because of ongoing communication. For example, you might realize, “I carpool to work with this person. We share the driving, and because I’m late, we’re showing up late, and it’s affecting my friend.”

Remember you’re only human. Accept that there will be slipups and give yourself credit for progress made.

Join the discussion: Have you ever apologized or made amends for something but found you just couldn’t let it go?

Two Conditions, One Struggle: Teaching Students with ADHD and Dyslexia

How Much Is Too Much Screen Time?