More Fire Than Water: A Short History of ADHD 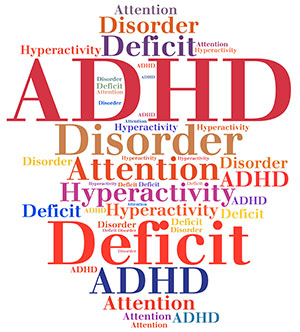 Far too many people think ADHD is a 21st-century diagnosis—or, at the very least, that it was first mentioned only in the 1980s, and making it a little suspect. What if you learned that the very first detailed published description of a condition that we now think of as ADHD was in 1798, when John Adams was president of the United States? Or that references can be found even further back in time—all the way to Ancient Greece!
In honor of ADHD Awareness Month, let’s take a short look at the history of ADHD.
Early history of ADHD
The earliest mention of what seems to be ADHD was by Hippocrates, often called the father of modern medicine. He lived in Greece from about 460 to 375 BC. He was known to have made at least one reference to some patients who could not keep their focus on any one thing for long and had exceptionally quick reactions to things around them. He thought the cause was an “overbalance of fire over water” and recommended a bland diet that included fish but little other meat, a lot of water, and lots of physical exercise.
Not much else was said until Sir Alexander Crichton, a Scottish physician, described something like ADHD in his 1798 book, An Inquiry into the Nature and Origin of Mental Derangement. He referred to it as “the disease of attention,” and observed that people with the condition seemed to be mentally restless and have a hard time sticking with one task or game. Around that time, philosopher and physician John Locke wrote the essay “Some Thoughts Concerning Education,” in which he discussed, among other things, a group of students who could not “keep their mind from straying.”
Medical textbooks in the 1800s did refer to children who had what we think of today as ADHD symptoms. They used a number of different names for the condition: “nervous child,” “hypermetamorphosis,” “mental instability,” “unstable nervous system,” and “simple hyperexcitability” were among them.
Zeroing in on ADHD
Then in 1902, British pediatrician Sir George Frederic Still delivered three lectures about a group of children who had difficulty paying attention for a long time. He said they had a hard time self-regulating and could be aggressive or very emotional and defiant. He noted that they did not have any intellectual impairments, in general, and that more boys than girls were affected. Still also looked into the question of whether the unnamed condition was something passed down in families. He called what he saw an “abnormal defect of moral control.”
About 20 years later, doctors began trying to connect postencephalitic behavior disorder (PBD) to the symptoms of ADHD. The disorder was the result of an epidemic of encephalitis lethargica, a form of a brain inflammation caused by a virus. PBD was believed to lead to hyperactivity and other changes in children, but looking back today, experts know that those children did not actually have ADHD but a condition that displayed similar symptoms.
Around the same time, researchers began studying the effects of benzedrine, the first amphetamine. In Rhode Island, Dr. Charles Bradley used it to treat headaches in children, and noticed that it changed the behavior of some, especially in terms of their school performance and ability to focus. Dr. Bradley and others were curious why a medication that was a stimulant would help children calm down, and a number of studies were done to look into it. Doctors began prescribing it for children whom they diagnosed with hyperactivity.
Modern history of ADHD
An alternative to benzedrine appeared in 1944, when methylphenidate, another stimulant, was developed. It came on the market in 1954 under the now-familiar brand name Ritalin. Methylphenidate was created by a chemist, Leandro Panizzon, in Switzerland. He is said to have tested it on his wife, Marguerite, whose nickname was Rita. Grateful for her help, Panizzon named the medication in her honor: Ritaline, or Ritalin in the United States.
But the current name, ADHD, had still not been used. In 1968, the second edition of the American Psychiatric Association’s Diagnostic and Statistical Manual of Mental Disorders, DSM-II, lists the disorder, but under the name “hyperkinetic reaction of childhood.” It was thought to cause restlessness and distractibility in children, but believed to go away or lessen by adolescence.
Finally, with the DSM-III in 1980, there was more understanding of the condition. The APA named it Attention Deficit Disorder (ADD), with or without hyperactivity. In a revised third edition in 1987, the standard name was changed from ADD to ADHD. The DSM-IV in 1994 refined the diagnosis. It listed three different types of ADHD: inattentive type, hyperactive/impulsive type, and combined type. The current DSM-5 considers them to be presentations, rather than types, that can change during the course of a person’s life.
Alternatives to stimulant medications were also developed along the way. The first nonstimulant, atomoxetine, came out in 2002 under the brand name Strattera. Others followed, including alpha-2 adrenergic receptor agonists, or antihypertensives, such as guanfacine (brand name Intuniv). More medication treatment options are being developed and tested even today.
Looking for more?
What do you think about some of the original names for ADHD?
ADHD isn’t new, but did you realize it was discussed by both ancient philosophers and 18th-century doctors? It’s only been in the past 100 years that we’ve come to better understand the disorder.

Awareness Month Aims to Set the Record Straight on ADHD

More Fire Than Water: A Short History of ADHD

What To Know About ADHD Coaching