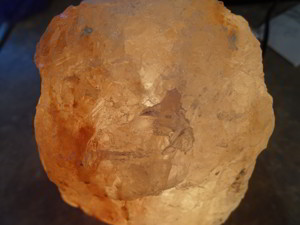 Have you read about the supposed benefits of salt lamps for ADHD symptoms? With a warm glow and the promise of helping to improve one’s health, Himalayan or pink salt lamps are very popular. Aficionados tout claims of an improved general sense of well-being, including helping to decrease the symptoms of some mental health conditions. But do any of those claims hold up?

Salt lamps are large crystals of rock salt, often gathered from a source in the Himalayan Mountains or other sources of ancient sea salt from deep in the ground, including the Western United States. They are typically shades of pink from the minerals and other deposits within the salt. To make a lamp, a chamber is carved to insert either a candle or a small light fixture and bulb; the heat from those sources warms the salt, causing it to glow. They come in various sizes and are often used as accent pieces.

Salt’s nature is to attract moisture, especially when warmed. It also has some antiseptic qualities. It could be argued that those two actors might serve to attract moist air and act as an air purifier, eliminating some impurities, allergens, and odors. However, the effects on air quality would be minimal.

Some people believe salt lamps also release negative ions that have the ability to improve focus and concentration for the people nearby. Based on that idea, there have been claims in some blogs and other publications that a salt lamp will help to decrease the symptoms of ADHD.

There is little scientific research on how the presence of a warm salt lamp might affect the symptoms of ADHD. Research has looked at the impact of negative ions, generated by a machine for that purpose, on depression and Seasonal Affective Disorder but it has not examined salt lamp-generated ions and ADHD symptoms.

Columbia University Medical Center’s Department of Psychiatry asked one of its experts about the benefits of salt lamps on improving a person’s mental health.

“There’s no evidence for it,” says Michael Terman, PhD, a professor of Clinical Psychology. “The ions emitted by activated salt are completely different from the negative air ions from a clinically tested apparatus that produces superoxide, and which may act via enhanced blood oxygenation. In Columbia University clinical trials, high-density negative air ionization produced an antidepressant effect far superior to low-density ionization (the latter being typical of home air purifiers).”

Salt lamps can add beauty to a room and the soft glow could help some people feel more at ease. Given the lack of research available on the health benefits of salt lamps, and that the research on generated ions for mental health has seen limited benefit for depression, salt lamps may not be helpful in addressing the symptoms of ADHD and cannot be suggested as a complementary intervention.

You can find more research on this topic and other topics related to ADHD in our ADHD Research Library. Learn more about CHADD’s Levels of Evidence for ADHD Interventions.

Pink salt lamps are very popular recently. Some people think they could help improve focus and concentration. But can they actually help with these symptoms of ADHD? Keep reading for what we found out.