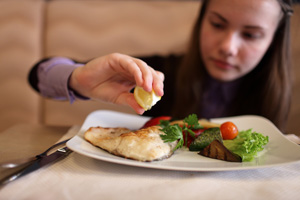 More research indicates that omega-3 fatty acid EPA could benefit some children with respect to reducing ADHD symptoms and increasing attention. Omega-3 supplementation is often discussed as a complementary intervention for ADHD.

Researchers working together in the United Kingdom and Taiwan studied 92 children between 6 and 18 years old who have ADHD in a randomized controlled trial for 12 weeks. The children were given either omega-3 fatty acid EPA or a placebo. The researchers also measured the children’s blood level of EPA (eicosapentaenoic acid, a polyunsaturated fatty acid commonly found in fish).

The mixed results prompt the researchers to consider supplementation a more personalized form of intervention, rather than a general recommendation.

“The omega-3 supplements only worked in children that had lower levels of EPA in their blood, as if the intervention was replenishing a lack of this important nutrient,” says co-lead researcher Carmine Pariante, MD, PhD, a professor at the Institute of Psychiatry, Psychology & Neuroscience at King’s College in London.

“For those children with omega-3 deficiency, fish oil supplements could be a preferable option to standard stimulant treatments,” Dr. Pariante says. “Our study sets an important precedent for other nutritional interventions, and we can start bringing the benefits of ‘personalized psychiatry’ to children with ADHD.”

Effective supplementation of omega-3 fatty acids can be achieved by more than including a softgel or fish oil to the daily routine. Including fish in multiple weekly meals could have an impact on brain health and might help to reduce ADHD symptoms for some people.

“High blood-levels of EPA without using supplements can be achieved through a good diet with plenty of fish, which is common in some Asian countries like Taiwan and Japan,” says Kuan-Pin Su, MD, PhD, co-lead researcher from China Medical University in Taichung, Taiwan. “It is possible that EPA deficiency is more common among children with ADHD in countries with less fish consumption, such as in North America and many countries in Europe, and that fish oil supplementation could therefore have more widespread benefits for treating the condition than in our study.”

Learn more about omega-3s and fish oil for ADHD:

Join the discussion: How often does you’re your family enjoy meals with fish? Do you think they help with your child’s ADHD symptoms?

Know Before You Go: International Travel with ADHD Medications