Sunlight for ADHD? What the Science Says 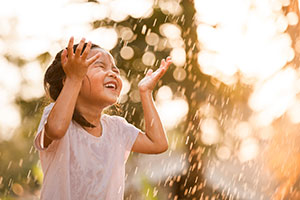 Researchers are narrowing in on the genes that appear to be the inherited cause of ADHD. However, non-genetic causes are still being explored, with some interesting findings that could contribute to either ADHD symptoms or “switching on” genes that may be at the root of ADHD.
The theory is one of those contributors toward ADHD is our tendency to spend the majority of the day inside and away from unfiltered sunlight. That children, like plants, just need a healthy dose of sunlight to develop their brains. This idea has caught the interest of a few corners of the internet, so we decided to look for research on the topic.
The claim:
A lack of natural sunlight is an underlying cause of ADHD. Young children, and possibly adults, could prevent ADHD symptoms by spending more time outside in unfiltered sunlight.
The research: 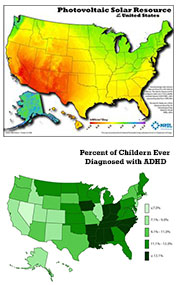 Three different directions of study seem to offer evidence of a connection between either receiving natural light or spending time outside in natural, green environments:
Could these things taken together indicate that a lack of natural sunlight contributes to ADHD diagnosis? We reviewed the following research studies.
Geographic variation in the prevalence of attention-deficit/hyperactivity disorder: the sunny perspective. This study is coauthored by L. Eugene Arnold, MD, MEd, Resident Expert at CHADD’s National Resource Center on ADHD. Dr. Arnold and his colleagues compared the level of solar intensity (how much sunshine and how strong the sunshine is) across the United States with the prevalence of ADHD by state. They found that states with the highest solar intensity also had lower rates of ADHD; they state that the higher solar intensity has an apparent preventive effect on the development of ADHD. The researchers state that the preventive effect might be due to an improved circadian rhythm—humans’ sleep/wake cycle—caused by exposure to bright sunlight. A disrupted circadian rhythm has an association with an increase in ADHD symptoms.
The Relationship between Serum Vitamin D Level and Attention Deficit Hyperactivity Disorder. This study compared a group of children diagnosed with ADHD to a control group without ADHD. Researchers noted that the children with an ADHD diagnosis had lower blood serum levels of vitamin D, which is created when human skin is exposed to sunlight. They also noted “ADHD is much lower in areas with sunny weather and sunlight can have a protective effect against the disease.”
Impact of Vitamin D Supplementation on Attention-Deficit Hyperactivity Disorder in Children. This study also noted the lower vitamin D levels of children affected by ADHD and decreases in the symptoms of inattention, hyperactivity and impulsivity in the children who received vitamin D supplements. The researchers concluded vitamin D supplementation for children diagnosed with ADHD might improve cognitive function.
A Potential Natural Treatment for Attention-Deficit/Hyperactivity Disorder: Evidence from a National Study. This study brought children diagnosed with ADHD into natural environments (city parks, state parks, and other green settings) and manmade or indoor environments for afterschool and weekend activities. The children all participated in similar activities, regardless of the setting. At the end of the study, the children in the natural, or green, settings appeared to have reduced ADHD symptoms, including a decrease in inattention and hyperactivity.
What researchers say:
Do these studies show a definitive link between sunlight and ADHD? Not quite; all of the studies end with a suggestion that more research be conducted before establishing lack of sunlight or outdoor exposure as a cause of ADHD.
“There are many possible explanations,” says Dr. Arnold. “For example, with more sunlight maybe kids get out more to play and get more of the exercise that, increasingly, we know is good for brain function.”
Referring back to circadian rhythm and the sleep/wake cycles, he notes that the ADHD symptoms of irritability, impulsiveness, and inattentiveness are also related to a lack of restorative sleep. Children, he says, are getting less sleep than they did 10 or 20 years ago, related to electronics and family lifestyles. Sunlight exposure helps to regular that sleep/wake cycle and helps children to sleep better—generally decreasing irritability and impulsive and inattentive behaviors.
The conclusion:
Sunlight appears to play a role in decreasing ADHD symptoms for some children, possibly by helping them to have better and more restoring sleep, by increasing the body’s natural production of vitamin D, by being present in natural environments, or by a combination of all of these things. Sunlight could also have an as yet unknown interaction with the brain or genetics by affecting gene expression.
However, there is no evidence that a lack of exposure to sunlight is a cause of ADHD or ADHD symptoms. Rather, it seems to play a supportive role in good health and sleep practices which are known to help improve ADHD symptoms.
Dr. Arnold says the research regarding sunlight is exciting and allows us to learn new things about how ADHD affects children.
"This opens up new vistas for us, new things to be investigated that maybe we hadn’t quite thought about before," he says.
For more reading:
Do you see an improvement in your child’s ADHD symptoms after time spent outside?

Sunlight for ADHD? What the Science Says

More Month than Money? Apps to Help with Money Management