Who Are the Social Media Influencers Reducing ADHD Stigma? 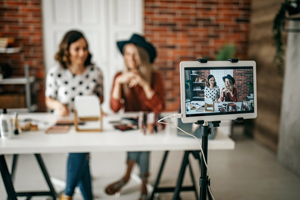 Social media influencers are creating new ways to de-stigmatize ADHD and other neurodevelopmental conditions. These influencers take on a positive role in raising ADHD awareness by sharing their personal experiences of living with ADHD.

“The rise of the social web, and the internet, in general, has given more people an opportunity to become influencers, sometimes in very niche segments within a massive online audience,” says Kevin Dean, CEO and president of ManoByte, a digital information company.

ADHD social media influencers appeal to variety of ADHD niche segments, offering their followers insight into the daily struggles and symptoms, along with tips, strategies, or ideas on how to tackle certain tasks.

“With social media, we have seen the rise of what has come to be known as the ‘citizen influencer,’” Mr. Dean says. “They are passionate individuals who develop and share their experiences and opinions on the social web for all to see. In their categories of influence, they hold considerably more sway than traditional celebrities.”

The rise of ADHD influencers

“Many influencers have made a name for themselves simply for the relevant and compelling way in which they post and share information from other sources,” Mr. Dean says.

The need to feel connected to others who share similar experiences has helped to give rise to ADHD social media influencers. Social media accounts that focus on ADHD can make knowledge more accessible to a wider audience. Sharing tips and strategies can help followers who have ADHD. Many influencers also share reviews of products or services that can be helpful to those with ADHD.

“Influencers have the advantage of being implicitly trusted by their audience,” Mr. Dean says. “They have worked diligently to earn that trust.”

An early and popular ADHD influencer is Jessica McCabe of How to ADHD on YouTube. As a host to more than 10 million visitors to her channel and as a speaker at the 2018 Annual International Conference on ADHD, Ms. McCabe has helped many people to better understand ADHD and their brains. Her personable style helped to make her popular and her videos are frequently shared on social media.

To help adults with ADHD, Ms. McCabe offers lively banter and tips on the latest tools, strategies, and resources. Her videos feature visits from leading professionals who weigh in with specific recommendations on how people with ADHD can enjoy a better quality of life. Through her channel and her webpage, she has created a community of caring individuals who reach out to help and support each other.

“According to my community, one of the most helpful things I’ve done has been to give people the language to describe their challenges and the strategies,” says Ms. McCabe.

Video platform newcomer TikTok is also well suited to making shared experiences accessible and visually stimulating for those with ADHD.

Actor Connor DeWolfe, 21, pokes fun while bringing awareness to ADHD-related issues. In “The Dopamine Song,” he listens to one song on repeat because, he says, doing so stimulates a release of dopamine in the brain. He also talks about what he considers to be ADHD superpowers, including hyperfocus, which he believes helps with his drawing abilities. He makes comedy out of things on which he has hyperfocused: his shoe customization phase, the Rubik’s cube phase, and having more than 4 million followers.

In one of his role-playing skits, he’s asked by a “parent” how he’s done all of these things. While spinning a basketball on his finger and skateboarding, Mr. DeWolfe responds, “I don’t know, I just follow the dopamine.”

KC Davis, who goes by Domesticblisters, knows that organization and cleaning is a real struggle for adults with ADHD. A licensed professional counselor with 1.2 million followers, she’s also the author of How to Keep House While Drowning: 31 Days of Compassionate Help.

Ms. Davis gives her viewers tips for resisting distraction and creating cleaning rituals to stay on task when doing boring or routine chores. In her videos, she uses a visual timer to help keep track of time while cleaning. She gets her viewers to see the importance of self-care for parents.

There are established influencers on the older platform of Twitter. @RoryReckons is from New Zealand and has more than 19,000 followers. They talk about the challenges of having ADHD, autism, and OCD, especially as a non-binary adult. Their shared experiences are aimed at those who also have ADHD and other co-occurring conditions. They pinpoint the sometimes contradictory nature of ADHD, in tweets about appreciating environments that are both orderly and chaotic, a term they call, “ordered chaos.”

Influencers are often trusted about ADHD

“Social media influencers not only have a lot of followers, but those followers are those that trust that particular person,” according to AgencyList.

The title “influencer” in that way is right—the followers of these and other ADHD social media influencers often follow their suggestions or rely on them for information. Many influencers take that responsibility seriously and strive to present good, science-based and evidence-informed information. But as with any online resource, followers need a level of media-savvy discernment to sort the good information from the bad.

Following these and other ADHD social media influencers can be helpful for learning tips and strategies on how to live fully with ADHD. However, be aware of your time on social media, since less time spent scrolling can also help you better manage your ADHD symptoms.

Looking for a positive influence?

Join the discussion: Who are your favorite social media influencers?

Who Are the Social Media Influencers Reducing ADHD Stigma?

When Students Attend IEP Meetings: What Parents Should Know