THROUGH its Young Scientist Research Awards program, CHADD has supported emerging researchers for twelve years, encouraging excellence in the field and broadening our understanding of ADHD. The recipients of the 2019 Awards—Rosanna Breaux, PhD, and Samuel J. Eckrich, MS—were selected from a pool of highly qualified applicants by a team of seasoned ADHD researchers, which included CHADD’s resident expert and professional advisory board.

Applicants provided their academic record, resume, list of published as well as ongoing research studies, and recommendations from professors. They also submitted one research study that was examined for significance, rigor of methodology design, clarity of the problem addressed, relevance/adequacy of literature review, and contribution of new knowledge in the field.

Improving Emotion Regulation in Adolescents with ADHD: Development of the RELAX (Regulating Emotions Like An eXpert) Intervention | Rosanna Breaux, PhD

Teenagers with ADHD experience difficulty in managing their emotions—particularly negative emotions like frustration, sadness, anger, and worry. Adolescence is a developmental period characterized by increased conflict with family and peers. This is particularly true for teens with ADHD, who often have deficits in social problem-solving and interpersonal coping strategies. Currently, few intervention options exist to target these social and emotional difficulties for teens with ADHD. Accordingly, Breaux developed the RELAX Intervention, an eight-week group-based intervention for adolescents with ADHD and their families.

Through RELAX, teenagers learn effective coping skills to help manage their emotions, and parents learn how to respond to their teens' negative emotions in a way that will foster better emotion regulation development. Teens learn how to be an effective listener, who they can share their emotions with and when, how to communicate in an assertive but not aggressive manner, and the social problem-solving skills necessary for successful communication with peers, parents, and teachers. RELAX also discusses different ways to respond during conflict, and when different response patterns are helpful versus harmful. Finally, RELAX provides teens and parents with the opportunity to problem-solve through current conflicts in the teens' lives.

Rosanna Breaux, PhD, is an assistant professor in the Department of Psychology at Virginia Tech. She earned her PhD in clinical psychology from the University of Massachusetts Amherst in 2017. Her research aims to improve the social-emotional development of children and adolescents with ADHD, particularly their emotion regulation skills.Identifying 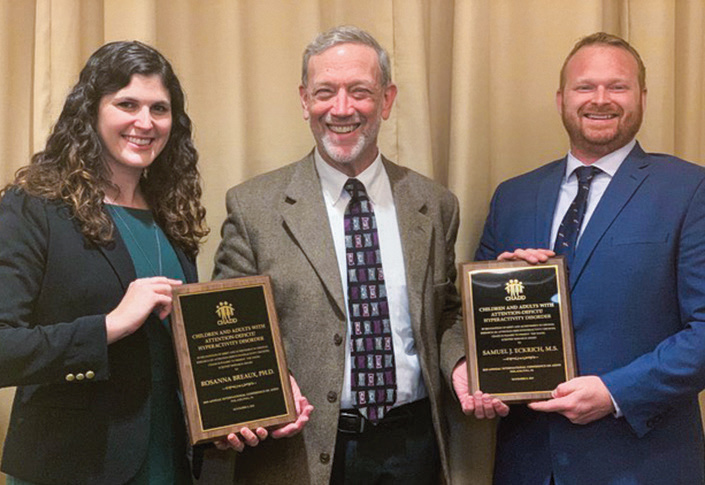 Children with ADHD have significant difficulties in core educational domains such as reading, writing, and math. However, the gold-standard treatments (e.g., psychostimulant medication, behavioral therapy) do not improve foundational impairments in academic achievement. One of the most potent contributors to children’s academic performance is a cognitive function called working memory (WM). A majority of children diagnosed with ADHD have significant deficits in WM abilities. Traditionally, identifying brain areas associated with cognitive processes, including WM, involves neuroimaging techniques (e.g., fMRI) that are prohibitively expensive and generally inaccessible for the public. These imaging techniques also require participants to remain still and restrict movement to their eyes or fingers when completing cognitive tasks. This is particularly concerning given that increased movement facilitates cognitive abilities in children with ADHD.

Eckrich and the Children’s Learning Clinic at University of Central Florida use a portable, cost-effective, neuroimaging technique called functional near-infrared spectroscopy that allows children to move while completing cognitive tasks. The research provides a better understanding of ADHD-related cognitive processes (especially working memory) while accommodating for the movement needs of children with ADHD. The findings may identify more accurate neurological targets for novel cognitive training programs and finally address academic difficulties among children with ADHD.

Samuel J. Eckrich, MS, is a doctoral candidate in clinical psychology at University of Central Florida and is currently completing a pre-doctoral internship at Kennedy Krieger Institute/Johns Hopkins School of Medicine in the neuropsychology track. His research interests include understanding underlying cognitive deficits in ADHD and addressing the educational and psychosocial sequelae of the disorder.

Creating a Cooperative Environment at Home

Teach Your Child to Read the Room

Homework in the Era of the Online Grade Portal

Camp Can Be a Place to Thrive

Music Study: A Dance with Attention

On the Way to Work