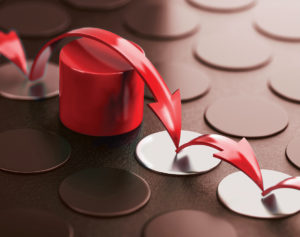 Suddenly, we were serving our students and families from home.

Regardless of all the news we had been watching about COVID-19 around the world, when it hit hard in Georgia, it felt sudden and drastic. Not only was finding toilet paper a major feat, but many of us were also managing our own children’s teleschooling while simultaneously ramping up our tech skills for running Microsoft Teams meetings.

It has been said that necessity is the mother of invention, like when I made a “travel desk” out of a suitcase rack and a large cheese board turned upside down so I could work in alternate locations of my house, depending on what everyone else was doing. In fact, the best part of providing services to my students during teleschooling was seeing some of their creativity in action and learning about what helped them stay on top of difficult situations and emotions. I don’t pretend to have all the answers, just a few “aha” observations.

I work for Fulton County Schools, a large metropolitan school district in Georgia that has a team of school social workers and social emotional learning (SEL) social workers. SEL social workers have specifically smaller caseloads made up of students at higher risk of harm to self or others and overall significant emotional dysregulation. Leading implementation of social emotional learning across the district is another critical part of our role. We make safe spaces for stakeholders and build bridges between home, school, and community on behalf of the student’s needs. SELs may also provide individualized strategies and approaches based on the child’s interests such as visual aids, verbal cues, social stories, and more.

Things that appeared to help

Among the students I worked with, it was interesting to hear what helped them manage a situation none of us had navigated before. Students were given work from only one subject per day, which often minimized overwhelm for students with ADHD. According to one, this was like eating the perfect amount of a chocolate bar, “one square at the time.” Those pesky in-school transitions weren’t looming over them. They knew that once they got their work done, they could research things of interest, like the difference between finite and infinite sets of numbers (I learned this is a thing), learn a new language, or love on their pets. The shift was significant, with students sometimes getting work done first thing in the morning rather than procrastinating or losing work time due to emotional outbursts. One student said they did not need medication while teleschooling because of the reduction in distractions.

Some students who had formerly missed lots of school due to anxiety were more successful under these conditions. They were now able to connect with their classmates, despite being at home, whereas previously when they missed school they felt disconnected from learning with the group. Scheduling bi-weekly meetings with favored teachers or case managers through Microsoft Teams also allowed them to review anything they missed, get extra help, or just chat.

Some parents transitioned to working from home, which proved to be both blessing and curse depending on the family and the child’s needs. It allowed some families an instant re-set, an opportunity to reconnect and decompress after long periods of battling to get anxious children to school. The stress had taken a toll. Operating in fight-or-flight mode for an extended time had made it harder to break the cycle.

Some students reported getting behind in their work because they had less structure; others had gotten off their sleep schedule or were struggling more emotionally. Sometimes it was helpful to procure charitable donations for weighted blankets or to provide parents with developmentally appropriate suggestions for setting up a schedule.

For some students, having to complete only 70% of the classwork at passing level in order to pass the class gave them the motivation to go ahead and get the work done. The feeling that the finish line was too far away diminished, and their energy was renewed. Some students, who had gotten behind as a result of being depressed, felt it was “too easy,” but were grateful for the opportunity. For some kids, passing all their classes for the first semester in a long time was cause for celebration.

Although most therapists and mental health providers switched to telemental health platforms, some families were not comfortable using them. Others loved having this option, even when starting with a new therapist. Even as they worried about their child getting behind, parents seemed to appreciate ongoing validation that their child’s mental health took priority over schoolwork. Sitting with the child as they finished work, knowing someone was with them, and helping connect them to teachers when they had questions, also helped ease a bit of anxiety for both parents and students.

Sharing pet pictures, recipes, or taking virtual tours of student’s homes, gardens and special study spots (my favorite was a tent), when kids weren’t responding to “how’s it going?” helped get keep them engaged because they knew someone at school still cared about them. Sometimes simply coaching kids on setting up a space at home just for doing schoolwork got them out of the funk that comes from staying in bed too long in the morning.

It sounds so simple to normalize, say “we’re in this together,” and give lots of praise, but for some students, not being able to go to school was a cruel reminder of other difficult times in life when they felt isolated and alone. Hearing that in the current situation they weren’t the only ones experiencing feelings of isolation reminded them how far they had come in their journey through painful, emotional times and how proud of themselves they still deserved to be.

Oddly enough, I sometimes wondered if the silver lining throughout this situation was having an opportunity to connect with the students in ways we could not before. Letting parents know it was okay to feel overwhelmed, too, and reminding them to take some time to breathe, take a walk with their child, or use a wellness app was not only okay but necessary to help them be able to give their child support.

Sending parents information on podcasts, online magazines, support groups, and articles proved to be a great resource as well. Although many were too busy keeping up with multiple roles, just knowing resources were available gave them much-needed reassurance that help and hope were there.

Addressing any financial needs—such as for food, housing, or medication—was obviously critical. Encouraging parents to take notice of all the things their child had accomplished, especially the small and mundane things, may have made a difference, even if just for one day. Students needed to hear that checking in with friends and classmates about how to do school assignments or how they were feeling didn’t make them seem dumb or weak, and that there is strength in connection, even when one is feeling vulnerable.

Takeaways from this time

It is often said that children are resilient. Health data also shows that as many as one in six children between the ages of six and seventeen has a treatable mental health disorder such as anxiety, depression, or ADHD. Add to that a global pandemic that sends students home to teleschool with parents who are drowning in a multitude of responsibilities and concerns. As grim as this sounds, we can find opportunities for resilience in the face of mental illness during the most difficult of times.

The Collaborative for Academic, Social, and Emotional Learning (CASEL; www.casel.org) defines social and emotional learning (SEL) as “the process through which children and adults understand and manage emotions, set and achieve positive goals, feel and show empathy for others, establish and maintain positive relationships, and make responsible decisions.” Despite definite strains, students often demonstrated signs of progress in SEL during remote learning. Misunderstandings with other students sometimes shifted to struggles with siblings. Instead of strategies for managing relationships in the school setting, we were now talking about managing relationships at home during a time of immense stress.

It became clearer that breathing techniques, journaling, and finding safe spots to sit and think were just as important in “real life” as at school. Knowing that support was just a phone call or Teams meeting away lightened the heavy load. It was beautiful to hear how some families started having more family meals or movie nights. I smiled upon learning that an older brother made up a game to get his younger sibling to check teacher emails and finish assignments each day. The game became a fun competition, with prizes of time together, and kept this student on track more than any SEL strategies I had given him. Other families struggled to keep tempers at bay and tried to keep their distance, even within the same house. For some, it was especially important to know that perfection wasn’t necessary to making progress.

Chocolate may be enjoyed best in perfectly bite-sized pieces. It means appreciating that any amount of progress shows you’re still engaged and trying, even when typical expectations aren’t met. Getting texts from students finishing that 70% benchmark before the deadline was some of the best news I had ever received. I also wondered if learning to play a classic Beatles tune on the guitar would ever have happened without added free time. There were tears shed over a failed class, despite an all-nighter trying to catch up at the end of the semester. It was heartwarming to hear a student say that they just want to do better next time, despite the intense disappointment. When a student finally responded to messages because you sent the latest video of your dog’s bath time or a handwritten note in the mail, you knew there would never be a more potent reminder of the power of connection. Maybe the lesson is that when things are hard, we don’t give up, but it’s perfectly okay to slow down, regroup, and begin again in small pieces.

Rachel Kitchens-Cole is a licensed clinical social worker in the Atlanta area who has worked in special education, school social work, and SEL services for over twenty years. She has created and presented ADHD trainings for faculty and staff. She is deeply interested in working with students and their parents to discover new ways of meeting challenges related to school success, including resources, information, and new ways of coping through education and support. Her special interests include ADHD and other neurological differences that give students a unique perspective and impact the way they learn and relate to the world. Married for over thirty years, she has three of the most interesting, creative children who have provided her with more inspiration, humor, and love than she could have ever imagined. She’s also excited to have the opportunity to help others with ADHD the way so many have helped her.

School-Based Services for Children with ADHD

What Do Students with Attention Challenges Really Think About Remote Learning?

Teaching in a Pandemic: Upheavals, Adjustments, and Moving Forward

Special Education and the Pandemic

Use Chrome Extensions to Reduce Distraction and Increase Productivity

A Tale of Rabbitry… and ADHD