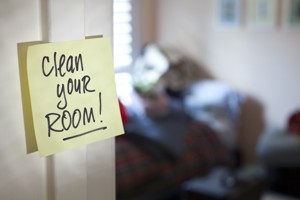 From the moment your child got his own bedroom, the battle began over how clean that room should be kept. Now your child is a teen, and the battle is still going on. But is it winnable?

Your teen with ADHD is struggling with organizational skills, the ability to prioritize and judge how long a task will take. Many teens are simply exhausted from a lack of sleep, homework, and extracurricular actives, along with new pressures and the responsibilities expected of adolescents. The bedroom is an area where teens feel they have their own space and are working out their personalities, styles, and control in their lives.

The bedroom as battleground

Roberto Olivardia, PhD, a clinical psychologist who treats teenagers and their parents, points out that messy bedrooms become battlegrounds in many families. Dr. Olivardia is also the father of a child affected by ADHD and familiar with the messy bedroom struggle. He often tells his teen, “it’s not about me as a parent, but you’re going to live with other people at some point. I’m concerned about how it will affect your relationships.”

Teens affected by ADHD are also coping with delays in maturity and difficulties with organizing. Your teen, like many others, might simply not know how to organize his belongings and where to start the task. Often teens feel overwhelmed as part of the maturing process and with new responsibilities. That feeling becomes reflected in your teen’s environment, Dr. Olivardia says. Turning a messy bedroom into a battle intensifies those feelings and could make your teen draw further away from you.

So how much should parents push their teens to organize their bedroom? It’s a fine line: Your teen would like to have control of his own space, yet you’d like him to learn how to organize his life, and the room is in your house. Dr. Olivardia says. “There’s no question there needs to be certain rules and policies, but not necessarily from an authoritarian perspective.”

Holly Graff, CPO, PCC, is a professional organizer who is often called by families to find ways to organize their homes, including teens’ bedrooms. Ms. Graff presented for our Ask the Expert series in All in a Row – Getting your Kids with ADHD Organized.

“Kids are kids, some are neat and organized, some aren’t,” she says. “I don’t think they notice or mind that it’s messy. It’s not the most important thing going on for them. There’s school, homework, sports, and other events. They may start something then go on to the next thing, put on one shirt and then another, and everything goes to the wayside. The wake is left on the floor!”

Ms. Graff agrees with Dr. Olivardia that parents need to keep a healthy perspective about the problem.

“Don’t get overly stressed out about it,” she says. “It’s only a room. There are more important things to worry about. Take a deep breath.”

“As parents, we want to be aware that we don’t go for perfection here,” Dr. Olivardia says. “They’re kids; they’re teenagers; and they will have a little level of messiness.”

Parents should establish some “house rules” to help their children create a functional space. These rules may include no food outside of the kitchen and that all laundry must be put in the laundry room on a specific day of the week.

With his own children, Dr. Olivardia says his family’s house rules include a “nothing on the floor” rule.

“When things are on the floor, I say just spend two or three minutes every day―120 seconds is all it takes to pick things up off the floor―until you at least can move through the room,” he says.

Short and simple: steps to organization

When you ask your teen to deconstruct the jumbled mass of debris in his room into specific categories and tackle them one at a time, your teen gets practice in organizational skills.

Ms. Graff explains, “For example, I’ll say, ‘Pick up all the school books and put them in the basket or bin. This is short, sweet and to the point.”

Ms. Graff recently began a new system with her own daughter and her clients to help get bedrooms picked up and maintained. She says you will need colorful sticky notes and a bold ink pen. With your teen, list items that are in his bedroom and another room he’s responsible for, such as a separate bathroom. Be sure to name separate items, Ms. Graff says. Instead of general terms like “clothes” or “books,” break it down to “clean clothes” or “dirty clothes,” “school books” or “comic books.” Start with 10 to 15 items, she says, and keep the list short and simple.

“Now, have your teen write those items on the Post-it notes, one item per note,” Ms. Graff directs. “Have your teen stick them on the back of the bedroom door. On the front of the door, have your teen put one sticky note item.”

This begins the process of getting the room cleaned, she says. Repeating the process is a motivator for your teen to keep the room picked up.

“Let’s say the item is ‘papers,’” she says. “The teen will now pick up all the papers in the room. Then either trash or keep. If keep, have a folder or bin for them.”

You can select the next sticky note from the collection behind the door, Ms. Graff says. Picking out just two or three each day is a good step, rather than all of the items. It might take a few days, but the room gets cleaned. If you notice too many of one item that was cleaned away starting to gather in the room, such as the papers, you can put that sticky note back on the front of the door to remind your teen to tackle that item again.

“It’s easy, simple, focused, colorful, and it’s fun,” Ms. Graff says. “Every day, it’s a new item and by the end of the week the room looks pretty good. Plus, it takes only about five to 10 minutes.”

Remember, time with your teen is short

Your teen will live with you for a just a little while longer before going to college or establishing his own apartment as a young adult. Dr. Olivardia says parents need to remember that this stage of life is fleeting and to pick their battles wisely. The teen years begin the framework for a relationship with your soon-to-be-an-adult child for years to come.

“There’s only a limited amount of time that a child will be living with his parents,” Dr. Olivardia reminds parents.

Resources to help your teen

Resources for your teen to clean and organize his space:

Wait! Don’t Let Impulsivity Get Ahead of You!

Tips for Managing Your Money