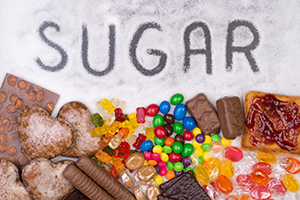 Question : My daughter is 10 and has ADHD. I’ve heard some people say that it’s because she’s eating too much sugar, but I really do try to watch what she eats. We limit candy and other sweets, although she’s allowed to have an occasional treat. Should we cut sugar from her diet entirely?

Answer: Cutting out sugar entirely is not a necessary part of your daughter’s ADHD treatment. Research studies show that sugar does not cause hyperactivity, nor aggravate most people’s ADHD symptoms.

Mark Wolraich, MD, and co-authors examined sugar and ADHD and found that sugar does not affect the behavior or cognitive performance of children.

Many parents remain unconvinced that sugar is a neutral player in their children’s symptoms.

“The strong belief of parents (that sugar consumption affects behavior) may be due to expectancy and common association,” writes the team led by Dr. Wolraich. “However, a small effect of sugar or effects on subsets of children cannot be ruled out.”

So, could it be the artificial colors and preservatives, and not the sugar, in a sugary food that prompts children to become more hyperactivity? Possibly. The research is not conclusive enough for a definite answer.

If you think your child is sensitive to either sugar or artificial coloring or additives, discuss this with her doctor, who might refer you to an allergy specialist for evaluation.

Whether your daughter’s ADHD symptoms are affected by candy or sugary foods or not, limiting the amount of sugar she gets is a good idea. Too much sugar can lead to problems with weight, cavities, and overall poor health. Fruits, like oranges, bananas, and berries, can be a sweet treat and contain many health benefits for children.