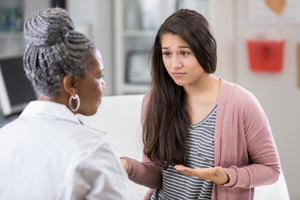 Does methylphenidate, a commonly prescribed medication for ADHD, increase the risk of psychotic events for teens and young adults when they first start on the medication? Recent research from Sweden could reassure parents and practitioners by finding no increased risk levels associated with the start of treatment.

“Our study did not detect an increased risk of psychotic events in adolescents and young adults after starting methylphenidate treatment,” the researchers write.

Stimulant medication and the small risk of side effects

Stimulant medications are the first-line treatment for ADHD symptoms for the majority of people. As with any medication, they carry the possibility of various side effects for some people. Most often, these will include an upset stomach or headache. Some people will experience more intense side effects, while a small number, especially those already at risk, may experience psychotic events. These can include seeing things that are not there or hearing sounds that don’t have a physical source. In these situations, immediately discontinuing the medication can stop the experiences.

“There’s a small risk of that happening,” says L. Eugene Arnold, MD, MEd, CHADD’s resident expert. “But there is a risk of whatever you do or don’t do. Doing nothing carries risks, too.”

Not addressing ADHD symptoms, either through behavioral management and treatment or combined behavioral and medication management, can have serious consequences, he says. In addition to school failure and behavioral problems, young people also run the risk of problems with friends and family, substance abuse and early sexual activity, damaged family relationships, low self-image, workplace failure, and poor long-term health outcomes. Prescribers and patients can work together to prevent or minimize the majority of possible side effects, allowing medication to be include in treatment plans.

“If you start low on the dose and gradually work up to the optimal dose you can avoid most side effects,” says Dr. Arnold.

The researchers “provide some reassurance that the risk of psychotic symptoms is not increased with methylphenidate treatment in young people who are given methylphenidate to treat ADHD,” says Lily Hechtman, MD, of McGill University, writing in The Lancet Psychiatry.

Methylphenidate is often prescribed as the brand names Ritalin, Concerta, and Quillivant. Patients, parents, and prescribers should work closely together, especially when beginning treatment, to determine the lowest effective dose that offers the most benefit. If the teen or young adult does experience any side effects or has questions about how he feels while taking the medication, he and his parents need to contact the prescriber as soon as possible to discuss possible changes to the prescription.

Interested in more on research into commonly prescribed medications?

Join the discussion: Has medication been helpful for your teen or young adult in addressing ADHD symptoms?