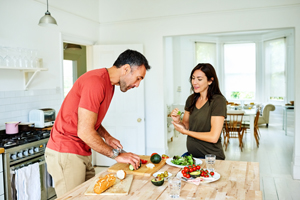 Could the foods a woman chooses during pregnancy decrease her child’s likelihood of being diagnosed with ADHD?

It’s been known for some time that omega-3 fatty acids can help to improve ADHD symptoms in some children. Several research studies have shown that addressing symptoms using omega-3 supplements can be helpful, but overall the studies have had mixed results in pinpointing effectiveness.

Knowing this, researchers are looking into ways supplementation could help reduce ADHD while the brain is still forming prior to birth.

Researchers in Spain studied data from 600 children, including samples of cord blood taken when they were born. Using the cord blood, the scientists measured the ratio of omega-6 to omega-3 fatty acids that would have been passed to the developing baby prior to birth, which is a time of intense brain development. The mothers were asked to complete a questionnaire that included questions about foods they regularly ate while pregnant.

When the children were seven years old, they were evaluated for ADHD. Researchers found that the children who had cord blood with a higher omega-6 to omega-3 ratio were more likely to receive an ADHD diagnosis.

“Our findings are in line with previous studies that established a relationship between the omega-6 to omega-3 ratio in mothers and various early neurodevelopmental outcomes,” says lead author Mónica López-Vicente, PhD.

“This study adds more evidence to the growing body of research on the importance of maternal diet during pregnancy,” adds Jordi Júlvez, PhD, a coauthor of the study. “The nutrient supply during the earliest stages of life is essential in that it programs the structure and function of the organs, and this programming, in turn, has an impact on health at every stage of life. As the brain takes a long time to develop, it is particularly vulnerable to misprogramming. Alterations of this sort could therefore lead to neurodevelopmental disorders.”

Omega-6 and omega-3 are essential fatty acids, part of a family of nutrients we need for good health but our bodies don’t produce on their own. Omega-3 fatty acids have been studied for their benefits on the brain and in reducing inflammation in the body.

“The brain has a huge number of cell membranes, and cell membranes are made out of fat,” explains psychiatrist Emily Dean, MD. “The fat content of the brain is a little different than the rest of the body—the only polyunsaturated fatty acids allowed into the healthy brain in any appreciable amount are the omega-3 DHA (a long-chain omega-3 present in fish oil and grass-fed meats) and the omega-6 derived (or obtained directly from animal foods) arachidonic acid. In addition, while arachidonic acid is found in equal amounts all over the brain, DHA is found predominately in the gray matter. That’s where our thinking takes place.”

Researchers are interested in the role omega-3 could have in addressing brain-based conditions, including ADHD. Studies have supported supplementing children’s diets with fish oil and other healthy sources of omega-3s as a dietary intervention for ADHD. Not everyone has seen significant results and often it takes up to a year to have noticeable improvement in ADHD symptoms.

The study authors are interested in the idea that supplementing the diets of expectant mothers with omega-3 sources could reduce the likelihood of a child’s later developing ADHD symptoms.

“Our findings suggest that maternal diet during pregnancy may modulate the risk to developing long-term ADHD symptoms in the offspring,” they write.

The researchers, however, made no suggestions for individual women who are interested in having children or who are expecting, leaving this as a conversation to have with your own doctor.

For the majority of people ADHD is a genetic condition inherited from a parent. Other possible causes include exposure smoking and alcohol, certain environment chemicals or pesticides, and premature birth or low birth weight. Some children develop ADHD-like symptoms from lead exposure in their environments or following a brain injury.

Want to know more about omega-3s and ADHD?

Join the discussion: Do you include sources of omega-3 in your diet?

Food Choices for Children with ADHD