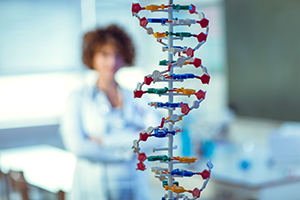 ADHD is a highly heritable condition, passed genetically from parent to child. Which genes, and in what combination, though, is the question researchers continue to pursue. A group of 80 researchers from Europe and North America published their findings last fall, highlighting 12 genetic points that appear to play a role in the development of ADHD.

“The new findings mean that we now—after many years of research—finally have robust genetic findings that can inform about the underlying biology and what role genetics plays in the diseases and traits that are often co-occurring with ADHD,” says Anders Børglum, PhD, one of the study authors.

Medical scientists have been studying ADHD since the 1930s, trying to understand why some people have the disorder and how it develops. Researchers observed how it appeared in families and realized it seems to be genetic, but they could not identify which genes carry ADHD traits.

Recent research narrowed in on sets of genes that appear to be involved in the development of ADHD and other brain-based conditions. Published in November 2018, Discovery of the first genome-wide significant risk loci for attention deficit/hyperactivity disorder focuses on 12 genetic regions that seem to play a role in the development of ADHD and possibly co-occurring conditions, including depression and anxiety. To date, it is one of the largest studies on ADHD undertaken at a gene-level scale. More than 55,000 people were involved as study participants.

“The search for such genetic risk variants for ADHD has spanned decades but without obtaining robust results,” says Ditte Demontis, PhD, a coauthor of the study. “This time we really expanded the number of study subjects substantially, increasing the power to obtain conclusive results significantly.”

Naming some of the genes

The information used to create our bodies is contained within our genes, small bits of biological material we receive from both parents when first formed as embryos. Our genes determine what color our hair will be, the shape of our nose, and if we’ll be tall like our uncle or resemble our grandmother. Genes also play a role in the physical development of our brains. Learning which genes contribute to ADHD or other mental health conditions has been a goal of researchers. If they identify the genes, they can develop better treatment options—and perhaps earlier interventions.

With the mapping of the human genome in the early 2000s, researchers began to explore which genes specifically contribute to ADHD. This study narrowed the hundreds of thousands of human genes down to a comparative handful that could underlie ADHD.

“These new genetic findings provide completely new windows to understanding the biology behind the development of ADHD,” says Børglum. “For example, some of the implicated genes influence how brain cells communicate with each other, while others are important for cognitive functions such as language and learning. The risk variants typically regulate how much a gene is expressed, and our results show that the genes affected are primarily expressed in the brain.”

Among the genes identified are DUSP6 and SEMA6D. DUSP6 is involved in the control of dopaminergic neurotransmission; SEMA6D could play a role in the creation of neural branches in the brain during embryonic development. Dopamine is often a neurotransmitter in low supply in the brains of people with ADHD. Neural branches are part of the structure of the brain; researchers have seen physical differences in the structures of brains of people with ADHD and those who do not have the disorder.

What it means for you

Any treatments related to this research are still a long way off. However, knowing which genes play a role and having a better understanding of the genetics of ADHD is a promising advancement for the future.

When it comes to reducing stigma, research that supports the genetic understanding of ADHD is important. Some of the other possible causes of ADHD—such as exposure to tobacco smoke, alcohol, lead, and pesticides while the baby develops before birth—are known, and families do their best to lower their child’s risks. Knowing the genetic risks could one day lead to similar preventative steps.

Join the discussion: What interests you about genetic research for ADHD?

Podcast: Making The Jump From High School To College