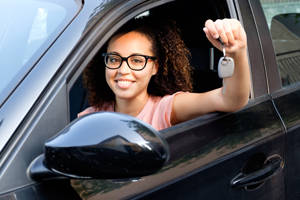 Teens with ADHD might not be as ready as their peers to take the wheel, according to new research. Their likelihood of getting traffic tickets and having crashes are significantly higher than those for teens who don’t have ADHD.

Teen and adult drivers with ADHD experience challenges with executive function, and are at greater risk of having car accidents and receiving traffic tickets for speeding or traffic violations. For teen drivers with ADHD, the risks are even greater.

The research shows that for drivers with ADHD, the number of car crashes is dramatically reduced when drivers employ medication as part of their treatment plans. But driver safety isn’t as simple as just having your teen take her medication. What else do you need to know before she gets behind the wheel?

Researchers at the Children’s Hospital of Philadelphia reviewed crash and traffic violation records for newly licensed drivers and identified risky driving behaviors in young people with ADHD. They saw that teen drivers were more likely to speed, not wear a seat belt, make unsafe lane changes, and to drive while intoxicated.

More than 14,900 records from teen drivers from 2004-2014 were reviewed in the study. Researchers identified 1,769 teens with an ADHD diagnosis. Nearly 37 percent of these teens were issued a traffic violation and nearly 27 percent a moving violation within their first year of driving. This is compared to 25 percent and 18 percent respectively among their peers without ADHD. Drivers with ADHD had higher rates of alcohol or drug violations and moving violations, which includes speeding, nonuse of seat belts, and use of electronic equipment—such as cell phones.

“What this study suggests is that we have to go beyond current recommendations of medication and delaying the age of getting licensed to decrease crash risk for teens with ADHD,” says Allison E. Curry, PhD, MPH. She is the lead author of the study and a senior scientist and director of Epidemiology and Biostatistics at the Center for Injury Research and Prevention at CHOP. “Their higher rate of citations suggest that risky driving behaviors may account for why they crash more. More research is needed to objectively measure if and how these behaviors specifically contribute to crash risk.”

Daniel Cox, PHD, is one of the leading researchers on the effect ADHD has on a person’s driving abilities. He has been a guest expert on driving for the Ask the Expert webinar series.

“Automobile accidents are a leading cause of death for people between ages 6 and 25,” Dr. Cox says. “For adults who don’t have ADHD, after age 25, the accident rate starts to decline significantly. That’s not true for those with ADHD. They are elevated during adolescence—three to four times more collisions, injuries, etc.—but the rates don’t go down, as they do for the general public, as they get older. The good news is that medications improve not only driving safety, they reduce collisions. [W]hen ADHD people are on medication, their accident rates radically drop.”

Researchers followed 2.3 million drivers with ADHD and found the rate of car crashes was dramatically lower for drivers taking medication to help manage their ADHD symptoms. The research indicated a 38 percent lower risk of accidents for men when they were taking medication, compared to when they were not taking their medications. For women, the risk was 42 percent lower. These reductions were found across all age groups in the study, including teens.

Taking medication is not enough to prevent a crash—understanding how symptoms may affect your teen while driving is essential. ADHD medications have limited amounts of time when they are active in a person’s system. You, your teen, and his prescriber should discuss ADHD symptoms and the time of day when he is normally driving to determine the best medication and the best time to take it.

“We need additional research to understand the specific mechanisms by which ADHD symptoms influence crash risk so that we can develop skills training and behavioral interventions to reduce the risk for newly licensed drivers with ADHD,” says Thomas J. Power, PhD, ABPP, study coauthor and director of the Center for Management of ADHD at CHOP. “There’s not enough research currently being conducted on older adolescents and young adults with ADHD, particularly studies focused on promoting safe driving behavior.”

Habits your teen can develop now:

Looking for more on teens and driving?

What have you found helps you to keep your eyes on the road while driving?

Webinar: What Is Your Relationship with Food?