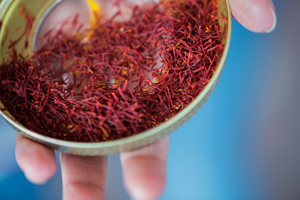 Could the spice saffron show promise as the foundation of a new treatment for ADHD? Researchers in the Middle East are exploring the use of this traditional culinary ingredient to potentially address brain-based health conditions.

To evaluate saffron’s effectiveness at addressing ADHD symptoms, researchers in Iran conducted a small-scale study of 54 children, divided into a group receiving saffron capsules and one receiving methylphenidate. The spice has already been studied as a possible antidepressant and has been used as a traditional remedy for centuries. It’s commonly used as a fragrant spice and to give foods a yellow color.

Saffron is the red stigmas of the saffron crocus, a flower that grows in Iran, Greece, Morocco, and India. Some countries, including the United States, have small-scale production of the flower, but the majority is imported. And it can be very expensive—it takes about 1,000 pounds of the flower to produce one ounce of the spice. Good saffron has the scent of sweet hay and imparts a sweet taste to foods, along with a yellow or gold color.

As folk medicine, which means a traditional remedy that has not been scientifically studied, saffron has been used for reproductive health, skins concerns, baldness and hair loss, and breathing issues. Researchers are interested in its possible uses in treating depression and Alzheimer’s disease, along with supporting menstrual health. If you are interested in taking saffron as a supplement, it is best to discuss it with your doctor first, especially since there is evidence that too much can negatively affect some health concerns.

Building on research into saffron as an intervention for depression, Shahin Akhondzadeh, PharmD, PhD, from Tehran University of Medical Sciences and colleagues compared the efficacy and safety of saffron capsules to methylphenidate. Both groups of children, those receiving saffron and those receiving methylphenidate, demonstrated an improvement in their ADHD symptoms, with no significant difference in their rates of response.

Greg W. Mattingly, MD, of the Washington University School of Medicine in Missouri, said the findings are exciting. Families and professionals are interested in medication options that include nonstimulants that can be as effective as stimulants, he said.

“Physicians should be encouraged that a variety of natural compounds are now being explored for their role in treating and improving mental health conditions,” says Dr. Mattingly. “These important findings should be explored in larger studies around the world.”

Researchers in many universities and hospitals are continuing to look for new approaches to treating ADHD symptoms and executive function deficits. Some of these approaches include new medications and transcranial stimulation, while others scientists continue to look at behavioral therapies and lifestyle changes that are proven effective. It frequently takes years and multiple studies before a new approach is considered effective and approved for use in the United States.

Dr. Akhondzadeh and his colleagues state that their research on saffron showed only short-term effectiveness for ADHD, and they encourage other researchers to continue studying saffron for longer periods of time. They made no recommendations for the spice to be used as part of a current treatment plan.

What traditional remedies do you wish researchers would explore for possible health benefits?

Webinar: What Is Your Relationship with Food?