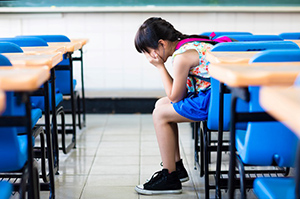 Suspending a disruptive student from school may seem like a quick-fix to a behavioral problem, but researchers are finding there are long-term academic, social and emotional consequences for the student.

A new study found that excluding, or suspending, children from school raises their risk of long-term mental health concerns and distress. A child affected by ADHD alone or with co-occurring conditions (learning difficulties, anxiety, depression, autism spectrum) is more likely to be suspended from school than a child without those conditions, causing higher levels of psychological distress at least three years or more after the suspension.

Tamsin Ford, PhD, a child and adolescent psychiatrist at the University of Exeter’s Medical School in England, led the research team. She says children who are suspended (“excluded” is the term used in the United Kingdom) from school may learn that acting out will result in further suspensions—and use it to their temporary advantage.

"For children who really struggle at school, exclusion can be a relief as it removes them from an unbearable situation with the result that on their return to school they will behave even more badly to escape again,” Dr. Ford says. “As such, it becomes an entirely counterproductive disciplinary tool for these children, as it encourages the very behavior it intends to punish."

Educators may assume suspension is a low-risk way to change behavior because there are no immediate costs associated with it. But the costs to students are significant in the long-term:

In addition to the high risk of psychological distress, suspension has significant hidden costs: a 2015 study of Texas schools found that disciplinary suspension relates to a 24 percent increase in dropping out of high school.

The Center for Civil Rights Remedies found the dropout rate for the United States is 23 percent, with more than 67,000 students annually leaving school before graduation. This creates a loss of $11 billion in tax revenue over the lifetime of the former students and an overall cost to society of $35.7 billion.

The most common reason for suspension is persistent disruptive behavior. However, one study found there was no standard definition for such behavior, and urged that a quantifiable definitions be developed and agreed upon.

Suspensions in the United Kingdom are often the result of persistent disruptive behavior, including annoying or distracting other students, calling-out in class, and general attention-seeking, behaviors often displayed by students affected by ADHD, as well as more aggressive actions such as verbally or physically abusing staff. In the United States, students who are disruptive in class or antisocial with peers or educators, or engage in violent acts, were most likely to be suspended at some point during their education.  Because a student with undiagnosed ADHD has difficulty managing typical day-to-day activities and can act out in frustration, it is easy to see why she would have a greater risk for suspension.

How common is school suspension?

School suspension is a common disciplinary tool, and suspension rates have steadily increased in the United States since the 1970s. The most recent data from the US Department of Education’s Civil Rights Data Collection shows that during the 2011-12 school year nearly 7.1 million students were suspended, either through in-school or out-of-school suspension, or were expelled from school. Of these students, 18.1 percent had special education needs, including ADHD.

Support and timely intervention are better than suspension for students’ academic and mental health. Early intervention is key for managing ADHD symptoms and preparing students to be successful in school. Don’t wait for your child’s teacher or school to make a recommendation before seeking help. Here are some steps you and the school can take:

Getting help before there is a problem

If your child is showing disruptive behavior at school, it is important to act before it could lead to a suspension. An evaluation for underlying conditions such as ADHD, learning difficulties, and mood and other disorders should be completed. For a child diagnosed with ADHD, who is at risk of being suspended, changes in treatment or the educational plans should be considered to effectively manage ADHD symptoms. Work with your child’s healthcare provider for a thorough assessment, and early and ongoing interventions.

For more information about exclusion from school and ADHD:

Suspending a disruptive student is a short-term fix for the school but can lead to bigger problems for the student. Researchers are finding that suspensions can lead to more severe behavioral issues and affect a student’s mental health. Keep reading for more information on how you can help your child avoid the problems that can lead to suspension.

Ready to start your career?