What to Do When ADHD and ODD Co-Occur 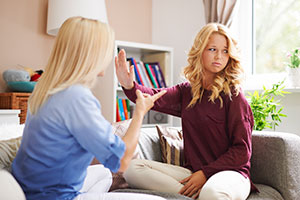 You ask your daughter to come to the family dinner table and she launches into an angry outburst. It’s the same routine every evening. You set her curfew for 11 p.m., but she has never gotten home before 1 a.m. In response, you move her curfew to an earlier time, but she continues to ignore it and blows up when you try to talk with her about house rules.
You end up feeling like you’re walking on eggshells around her because you never know how she will respond to even the smallest comment. Your daughter’s behavior upsets the entire family, because no one really knows what will set her off.
Sound familiar? That’s what it can be like to live with a child who has oppositional defiant disorder.
What is ODD?
Oppositional defiant disorder is fairly common among children and adolescents, and often co-occurs with ADHD. It is classified as a disruptive behavior disorder. That means young people who have ODD are often stubborn to an extreme, can be easily angered, argue with their parents and teachers for seemingly no reason, and go out of their way to avoid doing whatever is asked of them. Though most teens certainly act out and test boundaries from time to time as part of their normal development, ODD symptoms usually start much earlier—often around the time a child enters preschool. In addition, ODD behavior is consistently defiant, in contrast to average adolescent rebellion, which comes and goes.
“Parents of kids with noncompliant ODD problems get into these very coercive exchanges,” says Steve Lee, PhD, a professor of psychology at UCLA, a clinical child psychologist, and a member of CHADD’s professional advisory board.
Dr. Lee compares ODD to a border war between two countries, using the political science term “brinksmanship” to describe the conflicts that often arise between children with ODD and their parents, guardians, or other authority figures.
“I move 10,000 troops closer to the border and then what do you do, you move 8,000 troops and some tanks closer,” he says. “It’s sort of like going up to the brink. That’s often what happens with ODD. You have this escalation, this tit for tat, and it can explode, essentially, into a really negative interaction."
That kind of interaction is even more likely when ADHD is added to the mix, he says. ADHD and ODD commonly co-occur, though estimates of how many children in the United States have been diagnosed with both vary. Some sources show figures as high as 40 or 50 percent of all children with ADHD will also have an ODD diagnosis, but Dr. Lee says that number isn’t really accurate because it includes only those children who have been seen by a mental health professional.
Diagnosed with both ADHD and ODD?
As to why ADHD and ODD so often co-occur, Dr. Lee says it’s likely the conditions share some genetic factors. There may also be risk factors for ODD related to home life or environment, or psychological factors. But what’s really important, he says, is the effect of the two diagnoses combined. ADHD tends to make the symptoms of ODD more noticeable, and vice versa.
“When you have the oppositional irritability, noncompliance associated with ODD, that tends to be a very sort of flammable mix with the inattention, and of course with the hyperactivity and impulsivity,” he says. In other words, they build on each other. At the same time, each affects the treatment plan of the other.
“When ADHD is accompanied by ODD, what that tends to predict is a much more treatment-resistant pattern of ADHD,” says Dr. Lee. “It tends to decrease the responsiveness of kids to standard ADHD treatments when it’s accompanied by ODD.” He likens it to treating a cough. If you have a cough but you also have a fever because of an infection, for example, that will make treating the cough more complicated—you’re no longer just treating one problem.
Treatment for co-occurring ADHD and ODD
If your child has been diagnosed with both ADHD and ODD, the best treatment plan is one with a multimodal approach, says Dr. Lee. That means it shouldn’t rely on just one approach, such as medication or behavioral therapy, but find a balance. Though that is true for many people with ADHD, it’s even more important when ODD is also part of the picture.
“When a child has both ADHD and ODD, there may be a couple of other treatment elements that ought to be prioritized more so than if it was just ADHD only,” he says. That will depend on your child and your family situation.
Parent training is often the starting point for ODD treatment. Knowing how to respond to outbursts and bad behavior, as well as how to effectively discipline your child, is essential to helping her learn to manage herself. Individual and family therapy that may include social skills training or cognitive problem-solving skills training is another important tool. Medication is not usually effective in treating ODD alone, but when ODD co-occurs with ADHD, stimulants are still an effective ADHD treatment option.
Looking for more?
Do you know someone who has been diagnosed with both ADHD and ODD?

Preparing Teens to Manage Their Healthcare

What to Do When ADHD and ODD Co-Occur

Don’t Be The ‘Bad Guy’ When Getting Kids Organized