There is often CONFUSION AND DEBATE regarding the distinction between ADHD and autism spectrum disorder (ASD). This article begins with a description and elaboration of their similarities and differences. Then we’ll examine the impact of these two disorders in a four-year-old boy who has this dual diagnosis within a typical classroom, before closing with a discussion of diagnosis and treatment. 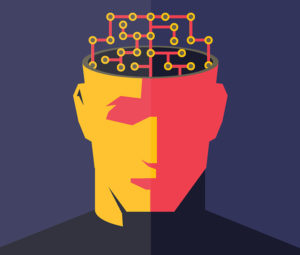 ASD is a neurological disorder that impacts development and involves a broad range of conditions characterized by challenges with social skills, restricted and repetitive behaviors, and deficits in speech and nonverbal communication. ADHD is also a neurological disorder in which individuals exhibit inattention, hyperactivity, and impulsive behavior that results in difficulties in their everyday life and tasks, such as interfering in their relationships with peers or leading to poor school grades.

ADHD is a common neurodevelopmental disorder often found in children. In the United States, approximately 9.4 percent of children between the ages of 2 and 17 have been diagnosed with ADHD. There are three presentations: predominantly hyperactive-impulsive, predominantly inattentive, and combined. The combined presentation of ADHD, where the person experiences both inattentive and hyperactive-impulsive symptoms, is the most common. The average age of diagnosis is seven, and boys are much more likely to be diagnosed than girls, although this may be because ADHD presents differently in females.

ASD is another childhood condition that affects an increasing number of children. ASD is a group of complex disorders that impact behavior, development, and communication. About 1 in 55 children are currently diagnosed with ASD in the United States. Boys are four-and-a-half times more likely to be diagnosed with autism than girls.

ADHD is more common than ASD. According to the National Alliance on Mental Illness (NAMI), ADHD affects 9% of children aged 3–17, and 4% of adults. According to the US Centers for Disease Control and Prevention (CDC), around 1–2% of people across North America, Asia, and Europe have ASD.

Jordan in the classroom

Jordan, a four-year-old boy with the dual diagnosis of ASD (high functioning) and ADHD (inattentive presentation), is placed in a classroom with fifteen neurotypical developing peers, one teacher, and no aide. The class, which was in its tenth week of the school semester, was learning the letters of the alphabet.

The children had been assigned the night before to bring from home an item that began with the letters H, M, or B. The children were instructed to place their home items in their cubbies as they entered the classroom and then go to the rug by the teacher to begin the day’s instruction.

Before Jordan could sit down, he undressed from the clothes that his mother has dressed him in that day (a long-sleeved shirt and long pants), and changed into the same tennis shorts and tee shirt that he wears every day in class. He then looked lost as he tried to find his spot on the carpet near his peers, who repeatedly tell him to move away from them, that he is “yukky” and they don’t want to sit next to him on the floor.

A child raises her hand to ask the teacher if she may go to her cubby to retrieve her home item. Jordan raises his hand about 30 seconds after his peer and asks the same question. He waits until all of his classmates have returned from their seats to then goes to the area of his cubby. Even though he had placed his original shirt and pants in his cubby upon his arrival to class, he appears at a total loss, both to where his personal cubby space is located and what it is that the teacher has instructed him to do in the first place.

The components of both ADHD and ASD are at play here. Various red flags include:

When ADHD and ASD occur together

Individuals with ASD experience challenges with social skills, communication and thinking. Repetitive behaviors are also part of ASD. Some behavioral traits that are common to children with ASD but not ADHD include: trouble understanding sarcasm, humor, or irony; showing empathy; and making eye contact as well as deciphering other nonverbal communications such as facial expressions or body gestures.

On the other hand, individuals with ADHD may present with similar behaviors (trouble focusing and not reading social cues well, etc.), but this is due to their underlying difficulties specifically with attention, hyperactivity and impulsivity. For example, children with ADHD find it difficult to focus, sit still, pay attention, and curb their impulsivity, which may lead to poor social skills, difficulty coping with studies, and forming of relationships with peers.

In a 2014 review of studies looking at the co-occurrence of ADHD and ASD, researchers found that between 30 to 50 percent of people with ASD also have symptoms of ADHD. Researchers don’t fully understand the cause for either condition, or why they occur together so frequently. Both conditions may be linked to genetics. One study identified a rare gene that may be linked to both conditions. This finding could explain why these conditions often occur in the same person.

Getting the proper treatment

The first step in helping a child get the proper treatment is getting a correct diagnosis. Currently, there are no specific scientific tools, such as blood tests, to diagnose ASD or ADHD. Researchers are working on ways to use brain-imaging tools to identify both conditions.

Healthcare professionals specializing in childhood neurodevelopmental conditions will usually diagnose ASD and ADHD by observing the child and taking a complete personal and medical history. Additionally, tests may be administered to look for difficulties with learning, sensory processing, or motor skills.

Most experts agree that there is no cure for ASD. Many people with ASD do not see autism as something that doctors need to cure or that they need treating. People can, however, improve any health conditions they associate with ASD and take steps to reduce any daily difficulties of ASD.

In many cases, the sooner someone receives a diagnosis of ASD or ADHD, the better their chances of reducing problems with school, jobs, and interpersonal relationships. Some people use the following therapies, with varying degrees of success, to manage ASD:

Some people use the following therapies to manage ADHD:

Behavioral therapy is also often used as a treatment for both ADHD and ASD. Medication may also be prescribed to treat symptoms. In people who have been diagnosed with both ASD and ADHD, medication prescribed for symptoms of ADHD may also help some symptoms of ASD. A child’s doctor may need to try several treatments before finding one that manages symptoms, or there may be multiple treatment methods used simultaneously.

While ASD and ADHD are lifelong conditions that can cause similar behavior traits, they are different conditions with different causes. Scientists continue to study the connection between them. Research may reveal more information about the causes and more treatment options may become available.

Esther B. Hess, PhD, is a developmental psychologist and executive director of Center for the Developing Mind, a multidisciplinary treatment facility in West Los Angeles, California. The Center specializes in the assessment, diagnosis, and treatment of developmental and regulatory disorders including ASD, ADHD, selective mutism, childhood depression, and anxiety disorders. In addition, Dr. Hess is an author and a national and international speaker on DIR/Floor Time, a developmental/relational treatment approach of ASD and sensory processing disorder in children, adolescents, and young adults. Dr. Hess can be reached through www.centerforthedevelopingmind.com.

Hess, Esther. “Differentiation and Treatment of ADHD and ASD in Children,” presented at the CHADD’s 2020 Virtual International Conference on ADHD.

I Can’t Stop Thinking About It

Friendship Problems? How Parents Can Help

How to Motivate and Engage Twice Exceptional Learners

Double Trouble: Navigating Life as a Gifted Kid with ADHD

Stepping Back to Move Forward