At eight years old, Michael was diagnosed with ADHD. The traditional city school he attended declined to evaluate him to determine eligibility for special education and related services because his grades were above average. 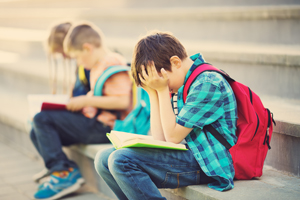 Instead, the school provided Michael with minimal accommodations through a 504 plan. As the years progressed, Michael’s grades began to decline, and his teachers reported minor problem behaviors in class. The school failed to address these concerns.

Michael’s mom heard that one of the local charter schools offered innovative programs and small class sizes. After touring the school and discussing his diagnosis with a school administrator, she decided to enroll him at the charter school for sixth grade, hoping the school would be a good fit and help him succeed.

What Michael’s mom did not know before she enrolled him was that the charter school enforced a very strict disciplinary policy. Due to Michael’s disability, it was very difficult for him to conform his behavior to the school’s rigid policies. He began to receive frequent disciplinary infractions for not paying attention in class, not following directions, off-task behavior, and poor homework completion. The accumulation of these minor infractions triggered daily after-school detentions. As per school policy, Michael was also prohibited from attending activities, class trips, or participating in sports with his peers.

Michael was removed from class several times a week to spend the period in the dean’s office for “problem” behaviors such as talking, fidgeting in his chair, and not actively participating in the lesson. Whenever he became upset about a consequence or tried to explain himself, he was assigned an out-of-school suspension for disrespect or defiance.

By the end of eighth grade, Michael had thirty out-of-school suspensions. As a direct result of his numerous suspensions and other classroom exclusions, he failed every academic class and was in danger of being retained. For three years, Michael did not qualify to attend any class trips or school dances. Labeled as one of the “bad kids” by teachers and peers, he felt discouraged and defeated in his school setting. Rather than provide Michael with child study team evaluations at his parents’ written request, school administrators advised his parents that the charter school might not be the right fit for him.

Michael’s story is a fictional narrative created from a collection of real life experiences of children with ADHD. Unfortunately, it has become all too common for such scenarios to occur—for discipline to be applied without regard to disability or used in a punitive manner and often in place of evaluations and supports. For students with special needs, the Individuals with Disabilities and Education Act (IDEA), the federal law that governs special education, emphasizes the use of positive behavioral interventions and supports to address behavior. Further, suspensions and other classroom exclusions of children with special needs for behaviors related to their disability may violate anti-discrimination laws.

While exclusionary discipline practices persist across the educational landscape in the United States, it may be a more serious concern in charter schools. Charter schools are publicly funded schools run by a private board of trustees, and are granted more autonomy and flexibility for educational innovation in exchange for increased academic achievement. On the national stage, charter schools have gained prestige among champions of school choice as beacons of hope for children in failing school districts and safe havens for learning. Critics have raised concerns about equity and access in charter schools for children with special needs and other at-risk populations.

Charter schools educate fewer children with special needs on average than traditional public schools. Proponents of charter schools claim the sector’s robust interventions and supports provide students a strong foundation and prevent over-classification. Others believe that militant disciplinary policies employed by some charter schools may be one factor in discouraging parents of children with disabilities from applying or may contribute to pushing out struggling students who are already enrolled.

Charter schools that fail to improve student outcomes risk closure. With state pressure for high academic performance, charter schools have co-evolved strict behavioral standards and expectations to prevent distractions from learning. Unfortunately, these policies can at times discriminate against children with certain disabilities.

In the charter school sector, the use of a “paycheck system” or “point system” has become an increasingly popular method to curb problem behaviors in the classroom. Students are expected to maintain a weekly “paycheck” or “points” balance by earning “dollars” or “points” for positive behaviors, while also receiving deductions for minor misbehaviors. For those students who do not meet the weekly goal, consequences can include weeklong detentions and silent lunches. They are often ineligible for school activities and trips.

At first glance, this behavioral intervention model may seem benign; it has even received praise as an effective method of disciplining inner-city children. But it can be demoralizing for children with behavioral disabilities who consistently fail to achieve an impossible goal. For children with ADHD, many of the infractions, such as off-task behavior, are directly related to their disability. It may also be more difficult for them to achieve the commendable behaviors that receive positive rewards at the same rate or frequency as children without disabilities.

The paycheck system is not used in every charter school. Just as with any other public school, charter schools’ policies and procedures vary significantly. However, recent studies have sparked concern regarding discipline of special needs students in charter schools. A report issued by UCLA’s Civil Rights Project found, nationally, that suspension rates for children with disabilities were 16 percent higher in charter schools than in their traditional school counterparts.

High suspension rates in charter schools are particularly troublesome since out-of-school suspensions are directly related to increased dropout rates and future incarceration, particularly for students of color and those with special needs. As a result, there has been a push nationwide to decrease suspensions and other forms of classroom exclusions and implement new approaches to discipline.

Charter schools may continue to struggle in this area, even those with the best intentions. Problems with addressing behavioral challenges are only compounded in schools that lack resources to employ an adequate number of certified special education teachers or maintain a variety of placements. Charter schools, which are often smaller and may have fewer resources than traditional schools, may feel ill-equipped to manage problem behaviors while maintaining a structured, safe environment.

Questions for parents to ask about charter school policies

Children with ADHD are disproportionally affected when harsh disciplinary policies are applied without accounting for their disability. It is discriminatory to exclude children from their learning environment activities with peers because of behaviors over which they have no control. Such actions may amount to a denial of a free and appropriate public education.

So, what should parents of children with ADHD do if they are considering enrolling their children in a charter school? Low special education enrollment and high suspension rates in charter schools throughout the nation should prompt them to ask more questions and explore the policies of each school individually. Some questions to ask include:

CHADD’s public policy committee invites parents of children with ADHD who attend charter schools to share their experiences with us. We look forward to hearing from you about disciplinary policies—including problems, concerns, and best practices—as well as successes at charter schools.