Did DaVinci Have ADHD? Why Do We Want to Know? 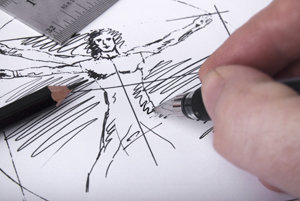 Did Leonardo DaVinci have ADHD?

Perhaps one of the greatest artists and designers in history, DaVinci is celebrated for his many works of art in Vatican City and other parts of Italy. His Mona Lisa is perhaps the best-known painting in the world. Now two researchers have proposed that DaVinci’s talents—and the fact that he was known to take many years to complete some of his artworks—are related to ADHD.
But can we really know whether someone in history had ADHD? Why do we search through history books and popular magazines for famous people to claim for the ADHD community?

“I think it comes down to the fact that people with a certain condition feel better when they know that someone who is really famous, or well-loved, has the same condition,” says Mary Solanto, PhD, a member of CHADD’s professional advisory board. Dr. Solanto is a professor at the Hofstra-Northwell School of Medicine on Long Island, New York.

Naming historical figures who have ADHD

A quick internet search returns dozens of famous people, both historical and contemporary, who are thought to have ADHD. Some well-known modern people have disclosed their ADHD diagnosis. Looking backwards, many historical figures either kept their mental health struggles private or did not have the benefits of what we now consider a good evaluation and diagnosis.

It is simply not possible to know if someone in the past had ADHD. Evaluations and best guesses are often made based on recorded information about someone’s behaviors or surviving medical records.

In DaVinci’s case, Marco Catani, a professor of neuroanatomy and psychiatry, and Paolo Mazzarello, a professor of behavior sciences, reviewed surviving texts by people who knew the artist. Historical documentation and DaVinci’s own notes were included in their review. The researchers believe that ADHD could explain “aspects of his temperament and the strange form of his dissipative genius.”

“His most attentive biographers had always indicated that Leonardo tried hard to please customers that were inevitably left with the disappointment of being denied possession of a concrete expression of his talent,” they write. “His contemporaries could never understand or forgive his lack of discipline, not his visionary mind.”

Dr. Solanto says there are many historical figures that have been similarly studied for possible diagnoses. There have been suggestions that Albert Einstein had ADHD and possibility autism spectrum disorder. Mozart didn’t finish the overture to the opera Don Giovanni until the day it opened, she says, which has been suggested as evidence Mozart had ADHD.

To really know whether DaVinci, Einstein, or Mozart, or any other historical figure actually had ADHD is difficult, she says.

Modern people who have ADHD

Why are we interested in figuring out who among today’s accomplished and famous have ADHD? Dr. Solanto says it’s a way of finding inspiration. Perhaps an ADHD diagnosis isn’t so bad if someone who is famous can also have it, she says.

“This is somebody you can hold up as somebody with whom you have something in common,” says Dr. Solanto. “Then you’re sharing in their greatness.”

By identifying with someone we admire who also has ADHD, we can imagine ourselves also achieving the things our role model has accomplished. “You can have ADHD and still be very successful,” she says. “It doesn’t necessarily hold a person back. We can look at this person and think, ‘Look at what he accomplished.’”

Many famous people, including Olympians Simone Biles and Michael Phelps, have disclosed ADHD diagnoses. Political analyst James Carville was diagnosed with ADHD in his fifties and spoke at CHADD’s Annual International Conference on ADHD in 2007.

“Having ADHD, and taking medicine for it, is nothing to be ashamed of [and] nothing that I’m afraid to let people know,” Ms. Biles said in 2016 when computer hackers tried to embarrass her. Having ADHD was not an embarrassment for her, she said, but simply part of her life as a gold medalist. She encourages young athletes to strive for their full potential in their chosen sport.

Making guesses about modern figures who have not shared an ADHD diagnosis is difficult, says Dr. Solanto. “With a modern figure we don’t have all the facts.”

Celebrities who have disclosed a diagnosis include comedian and game show host Howie Mandel and musician Adam Levine. Both have participated in ADHD awareness campaigns, as has home repair guru and television host Ty Pennington. His mother, psychologist Yvonne Pennington, has presented multiple sessions at CHADD conferences.

So why do we continue to look for the artists and athletes of the ADHD world?

“The idea that we may have some resemblance to this person makes us feel better [about having ADHD],” says Dr. Solanto.

Want to know someone who has ADHD?

Join the discussion: Who do you admire who has ADHD?

Did DaVinci Have ADHD? Why Do We Want to Know?

Webinar: Building Independence In Your Students