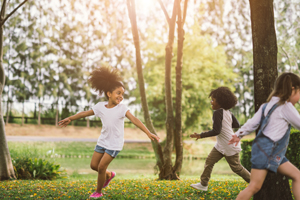 Does it feel like your child’s ADHD symptoms ease a little when he spends time outdoors? It’s might not be your imagination. Researchers are finding that even 20 minutes outside can make a huge difference in a person’s behavior and attention level.

Andrea Faber Taylor, PhD, and Ming Kuo, PhD, environment and behavior researchers and professors at the University of Illinois, found that spending any amount of time outdoors helps with “attentional fatigue.” That’s the feeling of not having the energy to stay on task and tune out distractions.

“Natural environments are good at helping us with fatigue,” says Dr. Faber Taylor. “We’re not making the argument that being outside cures ADHD, but it could be used for treatment because it’s free and there are no side effects. It’s something that kids are generally inclined to do anyway.”

Dr. Faber Taylor and Dr. Kuo asked parents of children with ADHD whether they noticed any patterns or changes in symptom levels depending on where the child spent free time. Parents selected from photos showing similar settings, including an indoor setting, outdoors in a park, or outdoors in a more built-up area with less grass. Then they rated their child’s behavior after being in each location. The children who played in the greenest spaces seemed to have the least severe ADHD symptoms.

Environmental psychologist and researchers Rachel Kaplan, PhD, and Stephen Kaplan, PhD, from the University of Michigan are intrigued by similar findings. Their studies with adults show that people concentrate better after spending time in nature.

Why outdoors for ADHD?

Dr. Faber Taylor and Dr. Kuo compared the symptom levels of two groups of children with ADHD. One group walked in a park while the other group walked in a downtown area. The group that walked through the park, rather than the developed city area, showed more improvement in ADHD symptoms. The improvements backed up their earlier results—being surrounded by greenery is good.

Patricia Barfield, PhD, an assistant professor of nursing in the Oregon Health & Science University school of nursing, talked to children with ADHD directly. She asked  a group of them to draw pictures of a time when their life was really good. Ninety percent of their drawings showed the children being active and 85 percent of them showed them outdoors.

“In pediatrics we ask about diet, exercise, safety, helmet wearing, but we don’t ask about family time spent outdoors or outdoor activities,” says Dr. Barfield. “We should, because the kids are saying that’s what makes their life really good.”

Dr. Barfield says teachers and school administrators also need to think more about how they treat outdoor time for their students with ADHD. Taking recess away is too often the punishment for children who act out, when that’s clearly the opposite of what’s needed.

Getting children with ADHD outside can also help with family harmony, she adds. So many parent-child struggles center around a child’s use of electronics—and that’s reduced when there’s more time spent outside.

Getting your children outside

Dr. Barfield recommends regularly building in outdoor activity time for the whole family while your children are young, making it part of the routine. Your child could invite a friend over to play in the backyard or your whole family could take a weekend hike together.

Think about activities and locations your child enjoys, where there’s space to run around, climb over logs, gather rocks and shells, pick berries, or study insects—whatever makes him want to be outside. Maybe a bike ride is what’s called for. Dr. Faber Taylor recalls one mother and child who brought food with them on nice days when they walked to school. There was a park on their route, and they would sit on a bench and enjoy some time together over their shared breakfast. It was a positive way to start the day.

If your child is already a teenager, you might have to be a little more creative. Teens usually focus on friends and phones, but you can still encourage him to do with things with his buddies—fishing, for example, or going for a hike. You might invite him to join you on a geocaching expedition, or maybe he could teach you about Pokémon Go. If you’re out for a walk or a hike together, ask your child to use the GPS on his phone to keep the family from getting lost.

“If your set kids up to have positive experiences in natural settings, so that they’re drawn to be there, the benefits will occur,” says Dr. Faber Taylor. These kinds of opportunities don’t have to be special events. Visits to the mountains or woods are great, but city parks are just as good.

“That’s what our study showed,” she says. “We just asked, ‘Where does your child play typically?’ Not ‘When was the last time you took a nature vacation?’”

Join the discussion: Does your family have favorite local outdoor spots where you like to spend time?

Help Put ADHD In The Spotlight