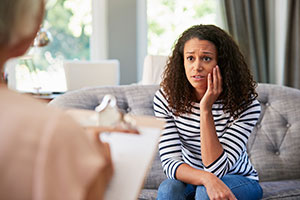 Boys are more likely than girls—or men and certainly women—to be diagnosed with ADHD. This is due at least in part to the fact that one of its more visible symptoms, hyperactivity, is more common among boys. Mental health professionals, parents, teachers, and others are more likely already to have ADHD in mind when considering what might be causing a boy’s behavior. They are less likely to attribute behaviors to ADHD when considering them in girls.
Who can be diagnosed with ADHD?
Boys, girls, men, women—though an evaluation will need to consider different symptoms as a person goes through life, ADHD affects both genders and all ages. But it is often missed in people who are older than 18.
“If you’re going to an adult practitioner, they may not have had specialized training in what are considered the childhood disorders,” says J. Russell Ramsay, PhD, co-director of the Adult ADHD Treatment and Research Program and associate professor of clinical psychology in psychiatry at the Perelman School of Medicine at the University of Pennsylvania. Dr. Ramsay is also a member of CHADD’s professional advisory board.
That means that ADHD might not even be on doctors’ radars when they are conducting an evaluation, because it was initially considered a child’s diagnosis, Dr. Ramsay says. It wasn’t even included in the first edition of the Diagnostic and Statistical Manual of Mental Disorders, the primary reference for mental health professionals published by the American Psychiatric Association, which is now in its fifth edition. When it did appear, in the second edition published in 1968, ADHD was only briefly mentioned, and then, says Dr. Ramsay, “It basically said, ‘It pretty much goes away by late adolescence.’” On the flip side, depression and anxiety were initially considered “adult” diagnoses, until providers started to understand that children could grapple with them too. In fact, they are commonly tied in with ADHD.
Women and ADHD
Many women go to a healthcare professional and come away with a diagnosis of anxiety or depression, or both, but no mention of ADHD. More often than either men and boys of any age or girls, adult women are more likely to be misdiagnosed, or to receive an incomplete diagnosis.
“ADHD is tricky. The mood or anxiety elements may be what finally drives a woman to go get help,” says Dr. Ramsay, adding that depression and anxiety are the “common cold” of mental health issues and universally familiar to psychologists, psychiatrists, social workers, and others. Once a diagnosis of depression or anxiety is made, it is often the focus of treatment. Mental health providers are less likely to think of the depression or anxiety as having been brought on—at least in part—by the challenges of coping with undiagnosed ADHD.
But even having a depression or anxiety diagnosis can be helpful, because the treatments may also be effective in terms of the undiagnosed ADHD, he says.
“Part of the treatment for depression is behavioral activation, which can also help with getting started on tasks and dealing with procrastination,” common symptoms of ADHD, Dr. Ramsay says. And anxiety is often addressed with behavioral treatments, which are progressive steps that could likewise prove effective. The double effectiveness of treatments is true not only of anxiety and depression. For example, Dr. Ramsay notes that a German doctor and researcher observed that ADHD shared some features with borderline personality disorder, including impulsivity, emotional instability, and difficulty with self-regulation. As a result, some of the treatments for borderline personality may prove helpful with symptoms of ADHD as well.
Diagnosed in adulthood
People who are not diagnosed until they are well past childhood have had ADHD all along—it was just not recognized by the adults in their lives when they were young. But the symptoms may well look different by the time the diagnosis is made, at least when comparing a 40-year-old adult and a kindergartener. Outward hyperactivity, for one, tends to decrease as a person ages—or they learn to better manage that symptom—whereas inattention and impulsivity do not.
It is also in adulthood that ADHD and other mental health conditions may be entangled, with the symptoms of ADHD overlooked or confused as something else.
In his own practice, after conducting an evaluation Dr. Ramsay spends some time considering what else might be driving the executive function deficits—whether it’s the result of trauma, for instance, or other issues.
“Maybe it’s that a recurrent mood or anxiety disorder comes in and sort of punctuates these things periodically,” he says, adding that many clinicians are learning to do the same thing, especially for women who have hit a plateau in their treatment. ADHD has found a place on the short list of other diagnostic possibilities that medical professionals need to consider.
Key to fewer overlooked diagnoses in future will be for clinicians to keep in mind that there is no one kind of person who has ADHD. If two people diagnosed with ADHD compare their lives, one might say he struggles with impulsivity, while the other might have no trouble staying organized but cannot remember details of a book she just finished because she can’t focus while reading. There is a lot of variety under the umbrella of ADHD.
“The line is: If you’ve met one person with ADHD, you’ve met one person with ADHD,” says Dr. Ramsay. “You definitely have not met them all.”
Looking for more?
Women and ADHD:
Do you know someone whose ADHD diagnosis was missed at first?

Addressing Executive Function At The Beginning of the School Year