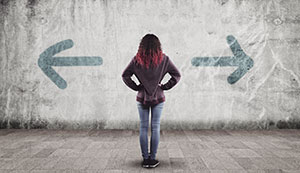 The transition to young adulthood begins in the late teen years. For young people with ADHD, that includes questioning their treatment plans and self-regulating their medications.
In fact, according to Russell A. Barkley, PhD, most late teens and young adults will even disregard a diagnosis altogether and claim they don’t have ADHD.
"Of all the kids we follow with ADHD to age 21, by 21, only 5 percent acknowledge that they have a disorder. They don’t think they have it," Dr. Barkley tells CNN. "It may take 10 to 20 years before they hit rock bottom or something severe happens before they realize they have a problem.”
ADHD? Not Me. Not a Big Deal.
According to a recent study, it may be that up to 83 percent of teens are just indifferent—they don’t much care—about including medication as part of their ADHD treatment plans, and 61 percent are not following the medication plan established by their parents and doctors. Additionally, 48 percent of the study participants admit to self-regulating, or choosing to take medications on a non-regular basis, and 60 percent won’t take their medications during the weekend or over holidays.
“I usually take it Monday through Thursday, because that’s when I’ll have my classes, and then if I need to study on the weekends, I’ll take it," one college student tells CNN. "When I graduate college, I’m not sure if I’ll still be taking it.”
Many teens and young adults offer explanations, including “I felt I could manage without it,” or “I wanted to find out if I could manage without it,” and “I was doing so well I no longer needed it.” Just as often, young people tell researchers, “I was tired of taking it.”
Among reasons given, from multiple studies and experts’ experiences working with young adults, is the fear of being less than one’s own self, being less creative or fun, and of a loss of genuine emotion. Dr. Barkley says he frequently sees an interest in self-regulating medications or discontinuing them when a young person has experienced poor dosing or prescribing of medication and a failure to have side effects properly addressed. Young people who have a bad experience with medication are most likely to discontinue its use rather than finding a medication and dose that is most effective for them.
"There can be a poor understanding of the side-effects profile of the meds, poor dosing, failure to understand any contraindications and dependency from excess usage," Dr. Barkley says.
Young adults and medication: A complicated relationship
The years following high school are a time of change and exploration. Questioning treatment for ADHD is a natural occurrence during this time of life, especially when most young adults feel they must do everything on their own with little or no assistance from others—including medication for a lifelong medical condition.
Many college students who discontinued their medications feel it was not helpful in addressing attention or improving academic performance. Students who have unmanaged ADHD are more likelythan their peersto stop attending college before graduation .
Many young adults would rather self-regulate medication or discontinue it altogether. Very often, as the young adult quoted earlier shared, they will continue to use medication when they “feel it’s needed” and plan to discontinue it after graduation. This is problematic, since most will begin their careers and establish long-term relationships at that time of life, all of which can be negatively affected by unmanaged ADHD.
"I don’t take the medicine every day," says another young adult. "But when I have to work or go to school, I take it. Or if there’s something that I need to get done."
What’s more, teens and young adults who self-regulate or completely stop using medication are not likely to begin including it again, at least until they reach their 30s or 40s and struggle with symptom management.
Finding a balance
For the parents of young adults, who have provided support and treatment management and are invested in their children, watching this self-regulation or discontinuation of treatment can be difficult. Often the young adult will experience struggles or failures that could have been avoided if treatment had been continued. Parents feel at a loss on how to help their young adult.
The young adult can go through struggles that are unexpected and might take them as personal failures, rather than growing experiences.
Instead of completely ending treatment, parents, young adults, and medical professionals can discuss treatment options and support systems that don’t including medication, such as cognitive behavioral therapy, academic coaching, academic assistance on campus, and regular contact with home and family.
Young people might want to discuss different medication options with their prescribers and should be encouraged to take a proactive role in their treatment, starting during their teen years.
One young adult worked out with her doctor how to use medication to her advantage. She now takes medication during weekdays but opts not to include it in her weekend routine.
“I knew it was a lifelong disorder that would need medication indefinitely," she says.
For more information:
Do you or your young adult self-regulate your medication as part of treatment? Has it been successful for you?

Addressing Executive Function At The Beginning of the School Year