When did you first tell a lie? You were likely very young (maybe two or three years old), afraid or ashamed of a situation, and used language to protect yourself.

What if some fibbing is not a character flaw? What if fibs are a self-preservation response, an outcome of challenges with inhibition, emotional regulation, working memory, and attention—signposts of ADHD? Could this insight give us better understanding, empathy, and strategies to support our loved ones with ADHD?

As the human brain evolved, it developed a self-protective mechanism designed to ensure survival in times of extreme danger or stress. Ever since our primitive ancestors were roaming the earth in their efforts to survive, our brains have needed to be highly vigilant and be alert for potential incoming threats. Faced with a threat, the brain must react in a split second; deciding how to best protect itself and survive is an instantaneous reaction—the well-known responses of fight, flight, or freeze.

As ADHD coaches we observed and documented a fourth “F” that manifests in times of real or perceived danger for children, adolescents, and even adults with ADHD: Fib. But let’s be fair and clear, this is not solely seen in those with ADHD. What we observed is that people with ADHD may find themselves in this position of protection more often, as they are under stress with the background pressures of ADHD. Or, in the moment, their ADHD may predispose them to partly processed, impulsive, or emotional responses. To understand this cascade of events, we need to understand what is happening in the brain at this point of challenged performance. It is a matter of biology and psychology.

Fibbing is a powerful fear response

The limbic region of the brain constantly processes information from our environment. It is alert to changes in the environment and senses the presence of danger. It assesses threats and instantaneously triggers or activates an attack or defense mode. We become chemically fueled and primed to respond into action. These chemical cascades trigger the response to fight (attack and defend) or flight (to flee) or freeze (play dead). This response diverts resources such as oxygen and energy stores to the moving muscles of the body in order to survive.

But now, we have a far more advanced brain through the development of the neocortex (new brain), the outermost level of the brain. This is the complex or advanced thinking and processing—an additional avenue for processing thoughts and consequently behaviors (or actions). It is a new line of self-defense achieved through language, as language centers are situated within the neocortex. With complex and advanced language not available to our primitive ancestors, we have the ability to verbalize both factual and/or fictitious reasoning instantaneously at point of performance, most notably in times of stress and threat.

People with ADHD often struggle with having impaired or challenged executive function, which frequently places the individual under stress. As ADHD coaches, we have observed this fib mechanism as a powerful fear response.

Fibbing often follows poor academic outcomes, challenges, or not reaching expectations at home or in the workplace, incomplete assignments or tasks, and missed appointments or classes. In such times of stress, the person doesn’t attack, run away, or play dead in front of teachers or bosses or spouses—he or she fibs to protect self-esteem. 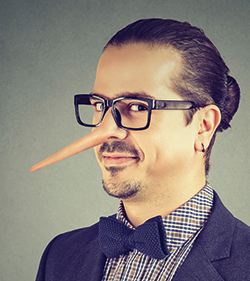 In times of stress, the person doesn’t attack, run away, or play dead in front of teachers or bosses or spouses—he or she fibs to protect self-esteem.

How the fib mechanism protects

The fib mechanism protects its maker in a number of ways.

Case example: Ben, 32, sought an ADHD assessment. He was constantly in trouble for telling lies at his construction job, misleading his foreman that he was on top of projects and then failing to meet deadlines. At home, he and his wife struggled with his continuous inability to stay employed due to his bad reputation and job performance. “I am a compulsive liar,” Ben says. “I don’t know why I do it but I do. I do it before I realize I am doing it. I think I do it because I feel like a failure, when I don’t finish tasks. I am sick of my wife and my boss being disappointed in me. I lie to get me out of trouble, but the lie follows me till I get trapped.”

Case example: Alice, age 8, and brother Leo, 5, were playing. Alice fibbed to her mother, Janet, about creating a “magic potion” that spilled on the carpet before friends were due for a playdate. Janet demanded answers, but Alice fibbed and said that she didn’t know anything about the potion. She was scared Janet would cancel the playdate if she found out the truth.

Case example: Cara fibbed to her parents about failing her college courses and that she had stopped attending classes altogether. She told them all was going well. She even altered her transcript to prolong the inevitable exposure of the truth, all the while overwhelmed with fear and anxiety. She kept up the charade to extend the reality of coming to grips with failure, which she knew would anger her parents and further devastate their relationship.

Case example: Shelly, a mother of three, can’t have anyone over to her home because her house is in chaos. When her friends call to drop over for a visit, or it is her turn to host the playdate, she panics. Shelley feels fear and fibs. This affects the entire family’s ability to both socialize and maintain friendships.

A fib often allows someone to avert a present danger or threat, at least for the time being. The escape from fear, embarrassment, judgment, guilt, or shame provides a brief but powerful sense of reward (of escape or victory). An example of this is when someone lies to lessen the intensity of an inquisition about work completion. The person is able to gain relief from what seems like a barrage of questions, while justifying possible completion scenarios in his or her own mind. “Oh, I’m nearly finished with the essay, I’ve only got the quotes to do,” he may say. The reality is far different.

How do weak executive function skills play in? By examining four key elements of executive functioning (adapted from books by Russell Barkley, PhD) and the associated challenges faced by those with ADHD, we can understand how this fibbing occurs.

So, what can we do as parents, partners, teachers, or healthcare professionals to identify, support, and alleviate the impact of this stressful situation and the maladaptive fibbing strategy—or habit—that follows? Here are some strategies to try.

The evolving and adaptable human brain has undergone significant expansion and modification as we progress and face new threats to our survival. With the advancement of complex brain regions and neural networks, we accessed a more complex, self-preserving response beyond fight, flight, or freeze—the fib response.

Not solely the domain of people with ADHD, fibbing is, however, a less successful self-preservation strategy. People with ADHD yearn to live their best life as much as anyone else, but inconsistent executive function appears to back them into vulnerability and therefore attack or defense mode. When ADHD impacts challenges with inhibition, emotional regulation (and motivation), attention management, and working memory in the person’s daily experience, it almost certainly contributes to this phenomenon.

Taking a biopsychological approach provides significant others with an opportunity to identify fibbing as a neurological response and not a character flaw, but a mind in crisis.

Monica Hassall, RN, is one of the principal coaches of Connect ADHD Coaching in Brisbane, Australia. She has had a 30-year career as a nurse and health educator in a range of specialties. She is the co-director of Connect ADHD Coaching and co-developed Parent Partner Coach Programs, which was included in the Innovative Programs section at CHADD 2015. She has coached clients both nationally and internationally.

Barbara Hunter, MEd, is an ADHD and executive function coach. She received a BS in special education from Indiana State University and a master’s degree in education from Lesley University in Cambridge, Massachusetts. She has over 30 years of experience providing guidance and direction in supporting academic and social-emotional success with children and adults.