or, HOW TO WRITE AN EFFECTIVE TEACHER LETTER 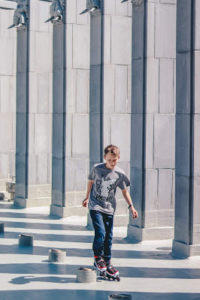 For years we approached each new school year with renewed hopes and rejuvenated expectations. Certainly, we thought, this would be the year when everything clicked and our son Jack would take off like a rocket through the academic stratosphere. The trials and tribulations of the last year would be lost like so many discarded booster stages. Soon we would be in orbit and on autopilot, soaring ever onward.

For example, I explained the impact of his ADHD, and its interplay with his ASD and other diagnoses, as follows:
“The bottom line is that Jack is hampered by a number of competing disorders and disabilities, any one of which would be a severe impediment to learning. However, taken together, the whole package is much greater than the sum of its parts.”

As far as his ADHD goes, I broke it down like this:
“For example, his ADHD (combined type) alone makes it difficult for him to filter out stray incoming information and makes it difficult for him to attain focus and then retain it (the ‘inattentive’ portion of his ADHD). In addition, he is significantly hyperactive at times and this further interferes with his ability to stay focused (often feeling the need to ‘self-stim’) [the ‘hyperactive’ portion of his ADHD]. Finally, he is exceedingly impulsive—another major impediment to his ability to concentrate.”

After mentioning in the letter that my son’s working memory, short-term memory, and long-term memory were impaired—as was his ability to process, store, and retrieve information. I felt that it would be helpful to the teachers to understand what this might mean in a practical sense. Accordingly, I explained what they might expect as follows:
“Thus, even if he were attuned to a task, he would soon reach a point where he might forget the instructions or a passage in the text or lose his way along a math problem. This then runs full steam into this tenuous grip on his focus and jars it loose.”

Another challenging area for Jack was his writing skills. While many of his typical peers would draft flowing manuscripts of descriptive prose, my son would only be able to produce brief spurts of handwriting containing few words. Was he lazy? No, it was just difficult for him to write. It was very challenging for Jack to create the sentences and plan out the paragraphs in his head. So, I relayed this information on to the teachers as follows:
“In addition, his writing is so laborious that it takes down whatever chance he has of responding as others might. Because it is such a chore to write, he responds in only clipped and shortened responses. Full sentences are an exception. Punctuation is a foreign concept. In addition, due to the length of time it takes, his planned response that was present when he began answering the question is often missing by the end. His deficits in executive functioning make it difficult for him to plan out an answer and stick to it.”

M. Jeffry Spahr, MBA, JD, is an attorney in Norwalk, Connecticut, and the proud father of two children, one of whom has ADHD. He has been the driving force behind the Connecticut governor’s annually declaring an ADHD Awareness Week in the state. Spahr is president of the Connecticut Association of Children and Adults with Learning Disabilities and founded the Association of Parents of Exceptional Children and Siblings to assist Connecticut parents in coping with the legal and academic challenges they face for their children. A former member of CHADD’s board of directors, he is a member of Attention’s editorial advisory board. The original version of this blog appeared as an article in the August 2018 issue of the magazine.