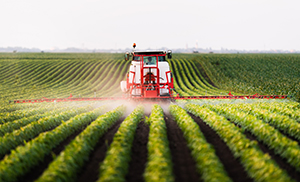 Do pesticides cause ADHD in some children, especially those without a family history of the disorder? A growing body of literature suggests they could be involved.

Pesticides and insecticides are used in fields to eliminate the various bugs that would otherwise eat the plants and damage or destroy fruits, vegetables, or grains. The most common types are organophosphate, pyrethroids, and chlorpyrifos. These work by attacking and damaging the nervous systems of insects. When applying these pesticides to growing fields, workers must wear protective clothes to protect their health.

People can ingest small amounts of these insecticides by eating foods that contain trace amounts. These chemicals can stay present in their bodies and can be measured through testing urine. These small amounts have been considered safe for human health.

Certain pesticides and insecticides, present either in the environment or in foods we eat, can cause ADHD in children who would not have otherwise developed ADHD symptoms.

Researchers in Denmark recently released their findings regarding the insecticide chlorpyrifos and a group of insecticides called pyrethroids in 948 pregnant women and their children who were taking part in an ongoing study. The children whose mothers had the highest concentrations of the insecticides in their urine during pregnancy were more likely to display ADHD symptoms between 2-4 years of age than the children of mothers with lower levels.

“We see a clear connection between these insecticides in the urine samples of the women and the ADHD symptoms displayed by their children,” says Louise Dalsager, a doctoral student who coauthored the study. “It was surprising to see that the connection was noticeable, even if the concentrations weren’t particularly high.”

Attention Deficit/Hyperactivity Disorder and Urinary Metabolites of Organophosphate Pesticides in US Children 8-15 Years. Exposure to organophosphate pesticides at levels common in the United States may contribute to ADHD prevalence.

The interactions among organophosphate pesticide exposure, oxidative stress, and genetic polymorphisms of dopamine receptor D4 increase the risk of attention deficit/hyperactivity disorder in children. The study points toward possible interaction between a child’s genes and environment in determining the likelihood of developing ADHD. This means that pesticides in the environment could trigger a genetic possibility of having ADHD.

Developmental pesticide exposure reproduces features of attention deficit hyperactivity disorder. This is an animal study but provides enough related information to support the concern that pyrethroid exposure is a risk factor for ADHD.

The majority of children and adults with ADHD also have other people in their families with ADHD. This shows that ADHD is primarily an inherited condition. For those people who don’t have a family history, identifying possible environmental risks for developing fetuses and young children could be helpful in preventing ADHD.

“Although we can’t change genetic susceptibility to ADHD, there may be modifiable environmental factors, including exposures to pesticides that we should be examining in more detail,” says Jason Richardson, PhD, DABT, who studies environmental factors in developing brain-based disorders, including ADHD. “We need to make sure these pesticides are being used correctly and not unduly expose those who may be at a higher risk.”

“Given the growing use of pyrethroid pesticides and the perception that they may represent a safe alternative, our findings may be of considerable public health importance,” says Tanya Froehlich, MD, the corresponding author of one of the above studies and a pediatrician at Cincinnati Children’s Hospital Medical Center.

What can you do:

Organic foods are not necessarily more nutritious than conventionally grown foods, nor are they lower in calories. We know that eating a variety of foods and focusing on fruits and vegetables promotes health in children and adults. It’s better to include lots of fruits and vegetables in your family’s diet than to worry very much about if they are organically or conventionally grown.

If you are attempting to reduce pesticides and insecticides that may be clinging to your fresh produce, you can wash your foods in clean, running tap water or use a mixture of water and white vinegar. Foods with a firm skin, such as potatoes and cucumbers, can be scrubbed with a vegetable brush. Peeling some foods can also help to reduce anything that clings to the food’s skin, but be sure to scrub the skins before peeling. If you choose a commercially sold vegetable wash, be sure to follow the product’s directions during use.

If you are concerned about the possible risk of ADHD from pesticides and insecticides, discuss those concerns with your own doctor or your children’s doctor, who can give you the best advice for you and your family.

Join the discussion: What role do you see food choices playing in the development of ADHD?

Webinar: When You and Your Child Have ADHD