What’s Up with Athletes and ADHD? 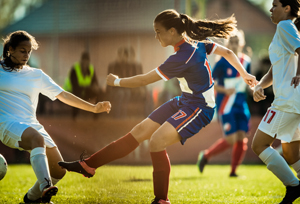 Many young people with ADHD are drawn to sports, or encouraged to participate, as a way to manage ADHD symptoms. Research has frequently shown the benefits of sport activities for ADHD along with the physical health benefits.

Now a group of researchers is asking if ADHD is more common in athletes than previously thought. It might even be that ADHD gives elite athletes a slight edge because of symptoms such as preservation or hyperfocus.

“Researchers are just scratching the surface on understanding the unique effects of ADHD on athletes,” says George Pujalte, MD, a sports medicine specialist at the Mayo Clinic in Jacksonville, Florida, who is interested in the study’s results.

ADHD and the benefit of sports

Sports and athletic activities are known to help increase neurotransmitters in the brain. That increase can help reduce ADHD symptoms for a short time for the person. Regular exercise and activity can increase the amount of time a person experiences an improvement in symptoms, including an increased ability to pay attention, to stay on task, and reduced impulsiveness. It can also improve sleep quality, which can help reduce symptoms during the day.

For the athlete, practicing the skills needed for the sport or activity also carries benefits into other areas of daily life. Skills such as returning to the task and cooperating with teammates help the player off the field, and accomplishments increase self-esteem and confidence.

More athletes who have ADHD than previously thought?

Doug Hyun Han, MD, PhD, of Chung Ang University Hospital in South Korea and his colleagues reviewed 17 studies of teen athletes and compared those studies to therapeutic use exemptions for ADHD medication grants by the major league baseball association. They found that between 4 to 8 percent of high school athletes have ADHD and 7 percent of college athletes employ stimulant medication for ADHD treatment. Among the professional baseball players, 8.4 percent had received exemptions for ADHD medications. The prevalence of ever having had an ADHD diagnosis for teenagers (12-17 years old) is 11.9 and for adults is 4.4 percent.

“ADHD may be more common in elite athletes than in the general population, since children with ADHD may be drawn to sport due to the positive reinforcing and attentional activating effects of physical activity,” Dr. Han and his colleagues write. “Common symptoms of ADHD may enhance athletic performance. Some athletes with ADHD naturally excel in baseball and basketball, which involve quick movements and reactive decision-making, due to these athletes’ inherent impulsivity. Many children with ADHD were reported to ‘hyperfocus’ [highly focus] on their own enjoyable activities without being distracted by regular life activities.”

Dr. Han notes that many athletes face stigma and bias when seeking treatment for ADHD symptoms. He also suggests that some athletes should consider nonstimulant medication options as part of treatment if their sporting organization won’t allow the use of stimulants in treatment plans.

“The management of ADHD in elite athletes may have important effects on safety and performance,” Dr. Han and his coauthors write. “Clinical collaboration with team physicians and athletic trainers are crucial to reduce safety concerns and to ensure the athlete does not violate antidoping rules. The focus of management should be on long-term outcomes for elite athletes in sport and life.”

Olympians who have ADHD

Olympians Simone Biles and Michael Phelps have both shared their ADHD diagnoses and parts of their treatment plans. Both have included sports—Ms. Biles is a gymnast and Mr. Phelps is a swimmer—in lifestyle management. Ms. Biles includes medication as part of her treatment for ADHD while Mr. Phelps does not.

“I have ADHD, and I have taken medicine for it since I was a kid,” Ms. Biles has told fans. “Having ADHD, and taking medicine for it, is nothing to be ashamed of [and] nothing that I’m afraid to let people know.”

“Growing up as a kid with ADHD, I was constantly bouncing off the wall,” Mr. Phelps says. His mother involved him in swimming, where he found the lifestyle management that helped him cope with symptoms.

Managing ADHD symptoms through sports activities may have played a role for both Olympians in bringing home multiple gold medals.

“The ‘hyperfocus’ traits in elite athletes with ADHD may block out distractions during practice and competition,” says Dr. Han.

Want to read more on ADHD and sports?

Join the discussion: Has sport help you or your child manage ADHD symptoms?

What’s Up with Athletes and ADHD?

Video: Which ADHD Medication Is The Best Choice For You?