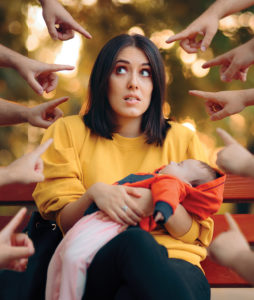 One of the most pernicious myths about ADHD is that it is caused by “bad parenting.” A mountain of science proves that this is just plain wrong. It’s long past time to do away with this harmful misconception once and for all.

Parents of children with ADHD are often blamed, shamed, and stigmatized. Friends, family members, and professionals might imply—or even state outright—that these parents just need to set tougher limits, model better behavior, or exercise more patience. Parents of children with ADHD are pummeled with all sorts of advice and judgment. They do not receive nearly enough understanding and support.

But the evidence is in. ADHD is not the product of parenting deficits; rather, it is a brain-based disorder of behavioral inhibition.

ADHD does tend to run in families, but it is mostly about Nature, not Nurture. Countless studies demonstrate that ADHD is a primarily a neurologic disorder. Like autism, mood disorders, and learning disabilities, many genes have been associated with ADHD. The strong heritability of ADHD has been confirmed by research on twins and adopted children.

Functional MRI and electroencephalograms show characteristic differences between ADHD and non-ADHD brains. Neuropsychological testing reveals characteristic deficits in active working memory and other executive functions. Radioisotope scans highlight specific variations in the dopamine and norepinephrine brain networks which are well-known to mediate self-control. And medication—which affects these neurochemical imbalances—modulates the hyperactivity, distractibility, and impulsivity that underlies associated impairments in learning, behavior, and socialization.

If parents of children with ADHD sometimes feel like they are not part of the solution, this does not mean that they are the cause of the problem. Rather, parent depression and anxiety are secondary to the difficulty of raising these beautiful but challenging children. Parent self-blame is only amplified by the ignorance of others. Parents of children with ADHD deserve the support of hard science and soft hearts, not the exasperated disdain of ignorance.

As Russell Barkley has written: “The idea that human self-control is largely self-determined and largely instilled by one’s parents during childhood should be discarded on history’s conceptual scrap heap.”

The neurological caste system may be the last frontier in the civil rights movement. Perhaps, the acceptance of developmentally different children begins with dispelling the myth of the bad parent. Once we stop blaming parents, they can stop blaming themselves. Then and only then will children with ADHD feel accepted and celebrated for who they are.

Dan Shapiro, MD, is a developmental-behavioral pediatrician in Rockville, Maryland, and director of the ParentChildJourney.com parent group training and support programs. He is the author of Parent Child Journey: An Individualized Approach to Raising Your Challenging Child; Parent Child Excursions: ADHD, Anxiety, and Autism; and Raph’s Tale. Dr. Shapiro serves on Attention magazine’s editorial advisory board.