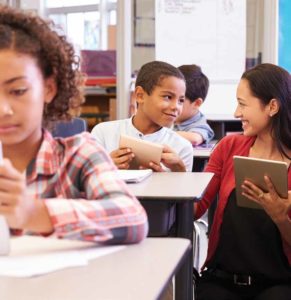 HAVE YOU EVER FOUND YOURSELF PACING as you talk on the phone or fidgeting while sitting through meetings and lectures? Perhaps you find yourself concentrating better when you are chewing gum? Children are taught to quietly sit still and pay attention in the classroom. But what if this is actually preventing some children from performing to their highest potential?

One of the most common childhood disorders, ADHD can persist into adulthood. Hyperactivity is one of the most observable symptoms and is commonly the first symptom noticed. Unfortunately, hyperactivity can cause problems for children both academically and socially. Children who express a lot of hyperactive behavior can be disruptive in class, leading to problems with teachers and friends. Even in adults with ADHD, the hyperactivity can be observed as increased restlessness and fidgeting.

In a recent study we published in the Journal of Child Neuropsychology, we found that children with ADHD perform better on a complex attention task when they are fidgeting. Our research team was interested in observing the relationship between children’s movement and their concentration.

Previous studies found that children were more physically active when they were given a difficult task in comparison to an easy one. Other studies have found that children with ADHD perform better after physical activity and are more behaved in school if given access to recess. Another recent study found that higher rates of physical movement were associated with better working memory task performance for children with ADHD, but not typically developing controls. Clinically and anecdotally, we hear parents comment that their children are more manageable and focused on their homework when they are participating in sports and have the opportunity to “use their energy.”

What makes our study unique is the precision of the data acquired. We “synced” up the performance on a trial-by-trial basis on the attention task with measures of motor activity for each individual child. Thus, the study was able to objectively measure the level of movement for each trial, allowing the study to more accurately map each individual’s movement to their accuracy on the attention test.

How was the study done?

We recruited 44 boys and girls between the ages of 10 and 17. Twenty-six of the participants had a diagnosis of ADHD, confirmed independently by the laboratory’s clinical psychologists. The other 18 participants did not have ADHD and were recruited to act as a comparison group.

The children wore a watch-like device on their ankles that measured how often and how intensely they were moving. Meanwhile, the children played a computer game that measured their attention and cognitive control. The game required participants to respond to the direction of an arrow (left vs. right) by pressing the appropriate key. The game was made more cognitively challenging by including additional arrows that the child had to ignore, and by requesting that the child respond as quickly as possible.

What did the study find?

Why is this happening?

We hypothesize that the increased movement seen in the children with ADHD, often labeled as hyperactivity, is a way for these children to unconsciously compensate for underarousal or underactivity in some brain regions commonly associated with ADHD. Our team found in previous publications that ADHD is linked with both hyper- and hypo-brain functioning. We think that the physical movement is a way to increase dopamine and/or noradrenergic activity in the brain, and that the increase in these neurotransmitters works to improve focus and alertness. The children in the comparison group did not benefit as much because the same regions in their brains are already adequately activated.

What does this mean?

The results of this study imply that parents and teachers should consider socially acceptable methods of movement for children that permit them to squirm and fidget without interrupting others. In addition, it is important not to have a punitive reaction when children are fidgeting, as it might be a compensatory mechanism that they are using to help themselves pay attention while they are studying or working.

By understanding the potential positive impact of allowing children with ADHD to move during attention-demanding tasks, we can think about how to incorporate the presence of physical activity into classroom curriculum. Teachers can structure their lesson plans so that students can take movement breaks. Before starting to teach about an important topic or when transitioning to a different topic, teachers could allow children to perform jumping jacks or move through some yoga poses. These and prior studies also suggest the importance of daily exercise for children, such as physical exercise in school and extracurricular activities.

What are some options?

There are fidget toys on the market that allow children (and adults) to fidget and move in a discrete way. Elastic bands beneath their desks can permit children to move their legs under their chair quietly. Allowing students to hold some putty or a squishy ball while doing school or homework, sit on an exercise ball instead of a chair, or have an exercise cushion on their chair may also enable students to move without disrupting others. Some children like to stand instead of sit when they are doing work, which should be an acceptable option if it is not disrupting others.

Future studies can assess if movement breaks (short bursts of exercise or yoga) prior to doing a task of attention are as effective as moving while doing the task. Researchers could also examine whether moving prior to doing the task decreases the need for children with ADHD to move as much while performing a demanding attention task, homework, or classwork. It is also important to know how long the effects of engaging in physical activity persist after the activity ends.

Future comparisons should measure the effects of exercise in comparison and in conjunction to using a fidget toy. These studies would increase the ability to make evidence-based decisions about practices (such as recommending fidget toys) that affect the classroom and home environment. We hope that subsequent research will examine the relationship between brain functioning for children who benefit from fidgeting versus those who do not, as it may increase our knowledge about ways to develop personalized treatment for individuals with ADHD depending on their most predominant symptoms.

How to Make a Good Apology

The Sirens of Today: ADHD, Social Media, and Self-Regulation

ADHD & Habits: You Struggle to Establish Them, You Can’t Live Without Them

Getting Your Teen to Join a Support Group

25 Money-Saving Tips for Life with ADHD

My Perspective on ADHD

10 Tips for Painlessly Growing a Chapter