In 2019, I inadvertently joined a movement I didn’t even know existed. Within hours of researching information on reducing my alcohol consumption, I was introduced to new phrases like sober curious, Dry January, sober sprint, plus Quit Lit (publications devoted to decreasing alcohol intake). I discovered resources like This Naked Mind, Club Soda, and Alcohol Lied to Me, in addition to apps to moderate or stop drinking altogether. Some apps even calculate cost and calorie savings based on your previous habits.

So, how did I get here? Slowly, incrementally, and, truthfully, somewhat through no fault of my own.

Over time, I had noticed that my number of drinks per week was increasing. While I was never sloppy drunk or operated a vehicle while impaired, my drinking was having an effect on my life. I rarely slept through the night, developed GERD, awoke unrested and dehydrated, and had concerns about the health of my liver. I started to enjoy my winding down with three drinks at the end of the day almost as much as hanging with my friends, or going to the gym. I take an ADHD medication and ignored the label’s alcohol warning. I ate fatty foods with my wine to slow down the absorption and again the next day to help with the aftereffects. I was lethargic most days, and that increased my already-problematic tendency to procrastinate.

Don’t get the wrong idea here. I didn’t have a morning drink, I could skip a few days, and I never blacked out. But while drinking a glass of wine at a reception or by a crackling fire is glamorous, drinking three glasses while vacuuming is not. I also noticed that my quest for wine and beer was becoming time-consuming. Not just cocktail hour, but I was counting down the hours until it was respectable to imbibe. My social life and my humor started revolving around alcohol. My wineglass was getting bigger, but my bank account was getting smaller.

It wasn’t all bad (which is part of the problem). My lack of inhibitions fueled a carefree attitude and I love making others laugh. I like this side of me. My occasional blunders were minor. I once organized a book club with a group of strangers I met at a neighbor’s party. I hope they realized it was just talk, because I don’t have time for one more thing.

In actuality, my journey is not surprising. As a society, more and more events have built-in alcohol components. Churches and museums have activities “on tap.” 5K races, ironically devoted to health, offer beer at the finish line. Festivals have beer gardens and cities and main streets have pop-up bars. Movies theaters that used to feature popcorn and soda now offer adult beverages.

There are reports that liquor advertisers realized that women were an uncultivated market. We now flock to wine-and-paint evenings, and book clubs can become as much about the wine as the featured book. Not to mention the memes devoted to mommy wine culture, teacher wine culture, and nurse wine culture.

On social media, instead of showing actual accomplishments, it is common to post photos with a glass or a bottle of booze. For a bad day, there are memes and posts about deserving a drink. There is now pushback like #Don’tPinkMyDrink to make female consumers aware that they are being targeted to increase profits.

Men have a separate set of challenges as drinking beer or liquor is considered a manly activity and can be the norm rather than the exception. Many activities that are geared towards men have alcohol consumption built in. It is hard to overcome this conditioning, which has occurred for generations.

Non-binary folks aren’t left out of the equation either. While their societal acceptance is a positive occurrence for the LGBTQ community, events geared to this population are as booze-soaked as those for traditional genders.

So it is no wonder that many of us are feeling a bit in over our heads. Luckily, the alcohol reduction movement has arrived and it is much more user-friendly than you may envision. It started in Great Britain with the government initiative Dry January, and is spreading rapidly. Participants don’t need to label themselves as alcoholic unless they want to. The common denominator is the desire to cut back or cut out using alcohol. You don’t have to wait till January to begin.

If you are considering joining the initiative, here is what I’ve learned.

Most people struggle with choosing a start date, because they have upcoming occasions where they would like to drink. In reality, there will always be a drinking occasion on the horizon and you could spend forever waiting for a convenient time. While there are no rules for this journey, pausing your sobriety for one night and then tacking an extra day at the end might not be in your best interest, although that is up to you.

Another set of challenges occur if you are the only one in your household who is changing their habits or if your career requires your attendance at booze-centered activities, officially or unofficially, such as happy hours, golf outings, charity dinners, or gallery openings. This is where peer support that I will describe below comes in.

Where to get support

One key to successfully managing any attempt to modify drinking habits is, not surprisingly, peer support. Much like CHADD helps you navigate the many aspects of ADHD, the resources for reducing alcohol consumption were my lifeline. Here are just a few.

Organizations that rely on face-to-face meetings:

For a DIY approach, Quit Lit has helped many participants. In addition to books, most authors have blogs as well as a presence on social media and YouTube, so you can gain wisdom before purchasing their books or programs. Here is a partial list of popular self-help resources:

Another key to success is substitution—for activities as well as your former beverage.

For me, cleaning out closets and painting spare bedrooms didn’t have the same effect. Bummer. 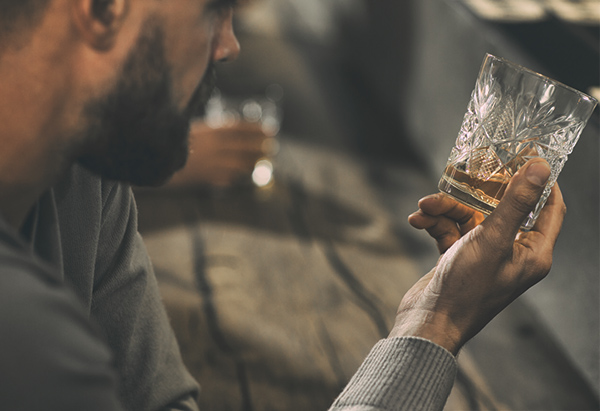 If you are considering reducing or eliminating alcohol, there has never been a better time than now. As for my journey, it actually followed a predictable pattern. I accomplished 27 of my 30 days. (I went out for ladies’ night on day 27. Bad move.) Toward the end I completely lost my taste for wine, but once I went back to it I was back at my old levels within two weeks. I was surprised that I couldn’t moderate as well as I had envisioned.

I’m now working on a moderation program and consume fewer beverages per week, but not my old amounts on the days that I drink. I plan to pause my drinking and aim for 100 days—or quit completely. But there is a wedding coming up in a few weeks, yada, yada, yada. I’m confident that my changed attitude, and doubling down on supports mentioned above, will help me reach my goal once I get underway.