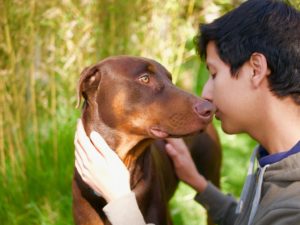 Saturday couldn’t have come any sooner. Steven was excited about his birthday invitation and had talked with his mom about it for days. It was a blast. There were lots of games and yummy food. When Steven’s mother came to pick him up, he didn’t want to leave.

As his mom began leading him to the car, he turned around and gave his friend a huge hug. Looking in her eyes, he told her, “Thanks PJ, I had a great time. I was so happy you invited me, because I never get invited to parties.” The joy in his heart would make this an unforgettable afternoon. PJ was a great friend. She wasn’t a classmate. She was a therapy dog.

THE ROLE OF ANIMALS IN THE LIVES OF PEOPLE has been sensationalized over the years. Newspapers, magazines, and films are filled with true and fictional stories of heroic accounts of how animals impact human lives. Recently, more attention has focused on the healing benefits of interactions with various species of animals. Pet ownership lends itself not only to the physical benefit of having a furry friend as a companion, but also to emotional and health benefits too numerous to list. Science now confirms what many have known for years: Pets are good for our well-being.

Numerous studies conclude that simply petting a friendly animal lowers one’s blood pressure and heart rate, resulting in a calmer and stress-free environment. Research during the past two decades reveals that positive contacts with animals can also produce hormonal changes. Human interactions with calm dogs, for instance, reduce human cortisol (stress hormone) levels significantly, and both humans and dogs experience an increase in oxytocin (an endorphin that promotes happiness). Interacting with our pets is equivalent to receiving the biological benefits of a positive spa treatment.

These added benefits within our homes extend far beyond biological benefits and can be extremely valuable to our children. The more profound the relationship between the child and the pet, the more meaningful the pet’s presence will be within the home.

Pets and children with ADHD

Research shows that for a child with ADHD, having a pet may have numerous additional benefits. These include supporting the child’s self-regulation and prosocial skills. When the child is involved in taking care of the animal, for example, he may need to learn to modify his verbal tone, nonverbal behavior, and impulsive responses, so that his furry friend will become more receptive and engaging. As the relationship between the child and the animal is nurtured, it can also have a lasting effect on their companionship and friendship. Parents should also realize that their child may turn to the pet during periods of anxiety and demoralization. During difficult times, the pet can act as a healthy social buffer and support system.

Animal-assisted intervention (AAI) is an emerging complementary therapy with definite benefits for children with ADHD. Research indicates that the opportunity to interact with a therapy animal can help motivate children to comply with the therapeutic process. The animal’s calming presence may reduce anxiety and arousal, thus easing interactions between child and therapist. A therapy animal can therefore convey to the child that the therapist is more endearing, thus enhancing rapport.

Understanding that animals can be extremely valuable may also lead some parents to consider introducing animals into their homes. Before incorporating a pet into your family, consider the sidebar’s guidelines.

Numerous studies, including a recent review on the benefits of dogs by Harvard Medical School, confirm that welcoming an animal into your family and therapy can, and will, positively impact all involved. To paraphrase writer-photographer Roger Caras, animals in the lives of children may not become their whole life, but their presence can make their lives whole.

Reflecting on the story of Steven’s wonderful experience at PJ’s birthday party, we see he gained a newfound sense of belonging. The paw prints of beautiful memories imprinted in his mind. When children face issues beyond their control, an animal’s presence is unlikely to exacerbate the problem and instead is likely to ameliorate the situation. A faithful companion animal will cheerfully give a child unconditional love and a chance to feel wanted. An animal will be a friend, even an unsolicited therapist. 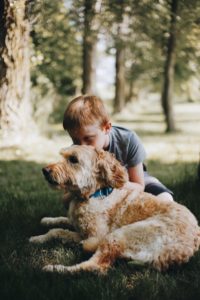 Introducing a Pet into Your Home

● PREPARE. Initially, consider the species, breed, age, gender, size, and activity level of the animal. It is also critical to consider your family’s lifestyle so you know whether and how your new companion will fit in.

● PLAN. Parents must teach their children how to be safe around their new friend. Children must learn what is acceptable behavior around animals, as well as what is unacceptable. They need to know how to greet their new pet. To properly integrate the pet into the family, parents need to plan and prepare, taking into consideration the species, breed, age, gender, and size of the animal. When they have a child with ADHD, parents may need to consider a few other factors, such as the child’s behavioral and developmental level, before they jump into adding a new family member.

● STAY INVOLVED. Get your children involved in training their new pet, including obedience and trick training. The more involved they become, the more engaged and committed they will be with their companion.

● PROMOTE. Relationships are nurtured rather than just found. Help children develop a strong commitment to playing and spending time with their furry friend.

Aubrey H. Fine, EdD, is a clinical psychologist and professor of education at California State Polytechnic University, Pomona. He is the author of twelve books, including Our Faithful Companions (Alpine, 2014), Afternoons with Puppy (Purdue University Press, 2016), The Handbook on Animal-Assisted Therapy (Academic Press, 2015), and The Parent-Child Dance (Skyhorse, 2015).
Jennifer Gomez and Madyson Kinsey are both seeking their teaching credentials from Cal Poly Pomona.

Left Out: How Teachers Can Help Change a Student’s Negative Reputation

Home Again: What to Expect When Your Adult Child with ADHD Returns Home to Live

A Guide to a Successful Evening Out

How Do I Get Through to My Teenager? [Webinar guests: Elaine Taylor-Klaus, CPCCC, PCC, and Diane Dempster, MHSA, CPC, PCC]

Reduce Anxiety and REACH for Success