Cigarettes and ADHD: A Robust Relationship That’s Hard to Break 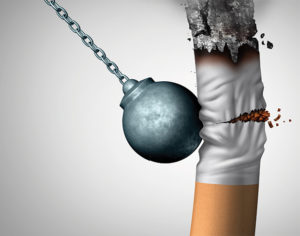 SINCE THE EARLY 2000s, the Centers for Disease Control and Prevention has consistently reported good news on the rate of cigarette smoking among adults in the United States—rates are dropping! In 2005, 20.9% of US adults were regular cigarette smokers. The most recently reported results indicated that the number was 14.0%. This reduction is meaningful, because smoking is the leading cause of preventable disease and death in the country, which translates into millions of human lives.

Despite this positive trend, rates of cigarette smoking have not been dropping for everyone, including adults diagnosed with ADHD. A study published in 1995 reported a smoking rate of 40% among adults with ADHD (Pomerleau, Downey, Stelson, & Pomerleau, 1995). Fast forward to a study published in 2019 and the rate was 43% in a sample of children diagnosed with ADHD who exhibited symptoms that persisted into adulthood (Mitchell et al., 2018). The main message is clear from these findings and the broader scientific literature—ADHD is a risk factor for smoking and rates of smoking are not budging despite nationwide trends.

The topic of smoking in ADHD is one of the more widely studied substance use comorbidities in the ADHD field. Researchers have shown that people with ADHD smoke their first cigarette at a younger age than their peers. They start smoking daily sooner and progress more rapidly from first cigarette to daily smoking. Plus, when they try to quit, they typically relapse more often than smokers who don’t have ADHD. Therefore, whether you look at smoking initiation, maintenance of smoking behavior, or smoking cessation, people with ADHD appear to have more difficulties.

The relationship between ADHD and smoking is robust. Alternative explanations that might account for this relationship do not usually pan out. For example, it is not due to depression or externalizing disorders that co-occur with ADHD. This has led researchers to examine what it is about ADHD in particular that predisposes individuals to smoking and the negative downstream effects of smoking. This article will focus on attempts to quit smoking.

Why do people with ADHD struggle to quit smoking?

About two thirds of the general population of cigarette smokers want to quit, but quitting is extremely difficult. Fewer than 1 in 10 smokers are successful a year out from their quit attempt. In studies where ADHD status is considered, the results are even more troubling. Smokers with ADHD struggle even more than the general population of smokers to abstain from smoking during quit attempts.

One consistent finding is that smokers with ADHD have more severe smoking withdrawal, including craving and negative mood. This results in a timeline that looks something like this when smokers with ADHD attempt to abstain from smoking during a quit attempt:

This process is what researchers refer to when they say cigarette smoking is more negative reinforcing when smokers with ADHD attempt to quit. That is, they are more likely to smoke and find it more reinforcing when something unpleasant is removed—in this case, the unpleasant thing that is being removed is the smoking withdrawal symptoms. 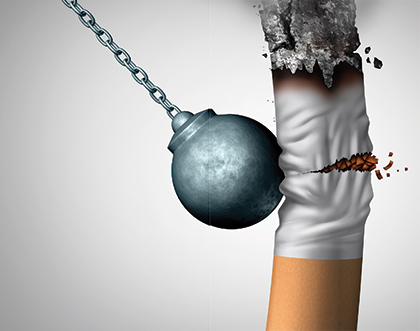 What helps cigarette smokers with ADHD to quit?

In one study, 32 daily adult smokers with ADHD were randomized to receive a stimulant medication for ADHD or a placebo (Kollins et al., 2012). Both groups also received nicotine patches. While those who received the stimulant medication demonstrated significant reductions in self-reported and clinician-rated ADHD symptoms, rates of bio-verified continuous smoking abstinence four weeks after the quit attempt did not differ between groups.

One promising finding showed that contingency management in the form of monetary reward for abstaining from smoking was helpful for ADHD smokers (Kollins, McClernon, & Van Voorhees, 2010). In that study, 44 smokers with and without ADHD were reinforced in the form of monetary payment for abstaining from smoking, which was bio-verified and did not rely on self-report. After twelve days using contingency management procedures, 64% of smokers with ADHD were abstinent compared to 50% of smokers without ADHD. Ten days after the contingency management procedures were removed, 22% of the smokers with ADHD remained abstinent in comparison to 9% of those without ADHD. While these findings were promising, the twelve-day quit period was to study withdrawal effects and was not a smoking cessation trial with the goal to quit smoking beyond the twelve-day period. As a result, the study only enrolled smokers who had no desire to quit smoking—people were excluded if they expressed an interest in smoking cessation treatment. Thus, these findings would need to be replicated in treatment-seeking ADHD smokers in order to demonstrate generalizability.

As a result of the paucity of studies indicating a treatment that is particularly beneficial for people with ADHD, cigarette smokers with ADHD are typically referred to evidence-based cessation treatments tested in the broader community of smokers. These treatments include pharmacological interventions, such as prescription non-nicotine medications like bupropion (Zyban®) and varenicline tartrate (Chantix®). Nicotine replacement therapy—typically referred to as NRT—are commonly used as well, including nicotine patches, gums, lozenges, inhalers, and nasal sprays. Some of these NRTs are taken when smokers experience particularly strong cravings and are referred to as “rescue” options. A recent meta-analysis showed how combing NRTs versus a single NRT can increase the chances of successfully stopping smoking (Lindson et al., 2019). Behavioral therapies and counseling conducted in-person or remotely have also been shown to be efficacious in helping smokers quit. A combination of these treatment options is typical in clinical practice and can be beneficial. For example, adding behavior therapy or other forms of behavioral support (such as quitlines) to pharmacotherapy is likely to increase the chances of smoking abstinence by 10% to 20% (Hartmann-Boyce, Hong, Livingstone-Banks, Wheat, & Fanshawe, 2019).

Another commonly discussed option is electronic cigarettes. E-cigs allow for the delivery of nicotine without the additional harmful chemicals found in combustible cigarettes. Use of e-cigs also allows smokers to closely mimic the behavior of smoking a cigarette. While e-cigs can help smokers stop smoking, this is based upon a small number of trials and overall there is low confidence in these findings (Hartmann-Boyce et al., 2016). Plus, while e-cigs appear to be less harmful in comparison to cigarettes, there is active debate about e-cigs being more harmful in comparison to not using e-cigs.

So, what does an adult with ADHD who smokes but wants to quit do? The field knows that ADHD is a clear risk factor for smoking and that these individuals struggle to quit. To date, however, there are no studies that show how certain ADHD-specific treatments improve smoking cessation outcomes for adult smokers who have ADHD. Given the challenges they face relative to peers who don’t have ADHD, any smoking cessation attempt for adults with ADHD should be developed and followed in close consultation with their healthcare provider.

John Mitchell, PhD, is an assistant professor in the department of psychiatry and behavioral sciences at Duke University Medical Center. He provides clinical services at the Duke ADHD Program, supervises clinical trainees, delivers workshops on the treatment of ADHD in adulthood, and conducts clinical research involving ADHD in adulthood. Among over sixty peer-reviewed publications and book chapters, he has published on ADHD treatment and processes targeted in these treatments, ADHD and co-occurring substance use, and developmental outcomes associated with ADHD.

How Can Couples with ADHD Keep a Strong Relationship?

Cigarettes and ADHD: A Robust Relationship That’s Hard to Break

Treating ADHD and Cannabis Use Disorder

Preparing for the Next Crisis: Your Circle of Care

The Downside to Technology for Students with ADHD

What Makes a Good Accommodation?

What If I’d Been Diagnosed Sooner?

Parenting Your Child with ADHD for Career Success

My Journey to Okay