THE MAIN MESSAGE of my presentation at the 2018 conference concerned the health consequences of ADHD. Specifically, I addressed how those consequences might add up over time and accumulate to the point that there might be an adverse effect on a person's life expectancy. 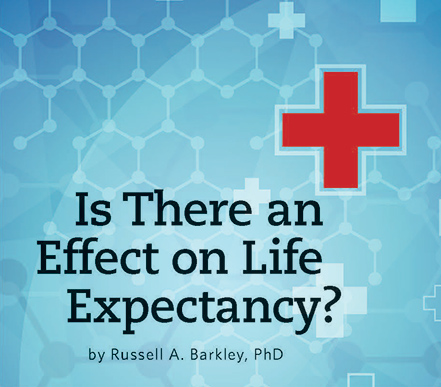 Now, in our study, we looked at that in several ways. First of all, there is a literature on ADHD related to its adverse health impact. We know that ADHD children are more prone to obesity as they develop. We know that the girls in particular might be prone to eating disorders like binge eating. We also know there are problems with dental care and increased dental infections and dental trauma. We have known for years that ADHD children are prone to accidental injuries of all kinds, that they're three times more likely to go to the emergency rooms or to be admitted to hospitals because of their accidental injuries.

There is a background of science that has been going on for well over a decade or longer suggesting that ADHD is more than just a mental health or educational problem, that it might be a health problem. We need to pay attention to these various findings.

More recently, longitudinal studies like the Milwaukee follow-up study suggested that when we look at the life course of these people over the twenty years or so that we're following them, we're also seeing increases in other risks that might relate to life expectancy. There's an increased rate of teen pregnancy, sexually transmitted disease, risky driving, road rage, accidents, speeding tickets, and other forms of risk-taking by adolescents, an increased risk of tobacco and alcohol use (particularly by adulthood), an increased risk of marijuana use. Along with these risks, we see some kids enter a pathway toward greater antisocial behavior, reactive aggression, and violence toward others. All of these carry some kind of impact on likely risk of mortality. That second piece of evidence began to suggest that we need to take ADHD more seriously for its health consequences.

And then, in the past four or five years, there have been several studies that actually use large populations of children and adults and looked at how likely are people diagnosed with ADHD to die from their ADHD or its high-risk activities. These studies indicate that children are about twice as likely to die during childhood from ADHD and the proneness to accidental injury that it creates. It's not so much a direct result of the ADHD, but that ADHD causes them to be impulsive and uninhibited and take risks. In adulthood, that risk doubles again to be almost five times the likelihood of dying sometime during the next decade of life, again from largely accidental injuries, and to a much lesser extent suicide attempts.

MY RESEARCH THEREFORE comes in in the midst of these different pathways in the literature suggesting that there could be some effect on life expectancy, defined as how many years do you have left to live by the time you reach young adulthood. Here is what we did. We already had the all data from the Milwaukee study, where we had done complete medical exams on all the children, and then we got very lucky. The University of Connecticut provided, free to investigators, a formula, an algorithm, a calculator essentially, into which you could enter fourteen different variables about a child at follow-up. You would then get a number back on what you could expect to see as the reduction in life expectancy for that individual. The life insurance industry uses these methods all the time, but previously we couldn't get access to those formulas because they're largely proprietary and highly protected by the insurance industry. When we entered the information on the children from the Milwaukee study, the results were very sobering for us. But at the same time they were very encouraging, telling us that this was an area we needed to pay much more attention to.

What we found is that if you were diagnosed with ADHD as a child, there was going to be about a nine-year reduction in your life expectancy, particularly for your healthy years of life than in comparison children who we followed into adulthood who didn't have ADHD. So, just ADHD in childhood alone was going to shorten life expectancy for about eight to nine years of time.

The real information that was more important to us was what happened if ADHD persisted into adulthood. By age twenty-seven, if you still qualified for an ADHD diagnosis, the reduction in life expectancy was around twelve to thirteen years. And that was shocking to us. It may not sound like much to people, when you take an average age of, say, seventy-five years of life for the average person and you reduce it by twelve or thirteen years, that doesn't sound like a lot. But it really is.

In fact, when we looked at our numbers, if you took the biggest four public health concerns that people worry about, that governments spend billions of dollars to try to reduce–obesity, smoking, risk for diabetes, exercise and diet–if you add those things together, ADHD is still two and a half times worse in its impact on life expectancy than the major areas of health that we're concerned about in our population.

SO, THE MESSAGE IS, ADHD is a public health problem. ADHD will affect not only your risk of mortality as a child or as an adult, it will affect your lifespan and longevity if it is not treated during that period of time, particularly during the crucial adolescent years. Now, that's the sad news, that there is a detrimental effect of the disorder on life expectancy.

The good news is that all of the variables we found that were reducing life expectancy can be changed. Whether it's exercise, or sleep, or nutrition, or getting more education, or losing weight, or cutting down smoking, or eliminating smoking, or reducing alcohol intake, or driving better–all of these things can be changed. And if you change them, then they change the results of these calculations, and you improve your life expectancy. The good news is that we can do things to help people lead nearly if not exactly normal life and life expectancy. To me, that's very encouraging.

The second thing it says is that the people who are most likely to help individuals to change those areas of life–physicians involved in primary care, internal medicine, cardiology, pediatrics, family practice–they don't know this. They don't know that ADHD is the big gorilla in the room when it comes to the other problems that children and adults are going to have. We need to make them much more aware of the role that they can play in helping us to improve the quality of life and lifespan of people with ADHD.

We also found that about thirty percent of the variation in human lifespan was due to a single trait: how impulsive, how uninhibited, how unconscientious you are in making decisions about your life and what you're doing. That single trait explained why people with ADHD were more prone to drink, to smoke, to gain weight, to not exercise, to have impaired sleep, to drive with risky behavior, and so on. All these behaviors were related to this one background personality trait of being uninhibited and lacking in conscientiousness. That's going to be a little harder to change–but it can be changed. We know our major treatments for ADHD do help improve these areas of personality. So, whether it's medication or cognitive behavior therapy for adults, or parent behavior training with children, or classroom management, we have ways of reducing risk-taking behavior that might also be beneficial in addition to these very specific health-change practices.

The take-home message here is that we have a public health problem. ADHD is worse than all of the other things we worry about when it comes to life expectancy. Nobody's paying attention to that aspect of this disorder. We need to take steps to make the public and professionals aware of these risks. We need to start to engage in changing these particular risk factors, because they are changeable. But at the same time we also have to understand that it's an uphill battle, because we're also dealing with a disorder of self-regulation that leads to disinhibited behavior. That trait is going to be a little bit more difficult to change unless we use the major ADHD treatments to do so.

Going forward, this information about ADHD will be a very strong and powerful message to the public, to families with ADHD, to people in primary care, and I hope, to government agencies. There's a risk here that's major, and there's something we can do about it.

Adapted and edited from CHADD's exclusive interview with Russell A. Barkley, PhD, following his keynote address on November 11, 2018, at the Annual International Conference on ADHD in St. Louis