THE CHALLENGING HORIZONS PROGRAM is a school-based treatment model for middle- and high-school students with ADHD. The CHP specifically targets the social and academic challenges many of these students experience.

Students participating in the CHP meet with staff several times during the school week and learn organization skills, study strategies, and social behaviors. Unlike some other interventions, these behaviors are not simply taught. Rather, the majority of students’ time in the program is focused on extensive practice and performance feedback.

According to Steven Evans, PhD, a psychology professor at Ohio University and the CHP’s chief architect, this practice and feedback over months is considered the key mechanism of change. “It’s similar to how people learn sports skills through extensive practice and coaching over time until the new behavior becomes automatic and they can do it without thinking,” says Evans. “The training interventions in the CHP take the same approach.” 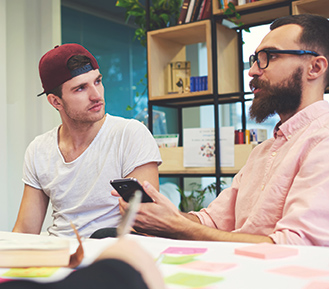 Evans and his colleagues continue to experiment with various delivery models. The original model began as an afterschool on-campus middle school program, where trained CHP staff met with students for a couple of hours, twice per week. While this model worked well for delivering the CHP services, providing services after school as opposed to during school did raise some challenges, among them staffing issues.

Another version of the model focused more directly on mentoring, where the student and staff person met once every week or two to receive the interventions. According to Evans, the benefits of mentoring after one academic year were found to be much less than in the after-school program. He adds, however, that this mentoring version does appear to yield meaningful benefits if provided over two to three years.

More recently, Evans and colleagues have been studying the effectiveness of incorporating the CHP into small-group study hall settings. Evans notes that many adolescents who have ADHD are provided with daily study halls with fewer than twenty students and a teacher who reminds them of their assignments and keeps them on task. Weaving the CHP into these regularly scheduled class periods removes some of the obstacles encountered within the afterschool version, and also allows for easier generalization of newly learned skills during the school day.

Evans and his colleagues subsequently trained the study hall staff to provide most of the interventions provided in the afterschool CHP model. Time students spent in both versions of the program were similar. Daily study hall training sessions were forty-five minutes in length, five days per week. After school sessions were two hours and fifteen minutes in length, two days per week. According to Evans, providing the CHP in small-group study hall settings and in frequent individual meetings appear to be the most feasible approaches thus far.

The CHP is designed to help adolescents with ADHD independently meet age-appropriate expectations. For that reason, the program does not focus on accommodating areas of challenge. “Accommodations are not intended to improve social or academic behavior,” says Evans. The CHP, on the other hand, strives to do so.

According to Evans, research suggests that the CHP produces meaningful change in academic and social functioning over the course of an academic year. He notes that one of the most unique findings is that benefits in social functioning (based on results of a study involving high-school students with ADHD) and academic functioning (based on a study of middle-school students with ADHD) actually increased six months to a year after the CHP ends compared to at the end of treatment. “That’s a very rare research finding with youth of any age with ADHD,” says Evans, “but it is consistent with the training approach as compared to other approaches to treatment.”

The Challenging Horizons Program was previously highlighted in Attention in 2005, the year in which it also received CHADD’s Innovative Program of the Year Award. The program is currently listed on the National Registry of Evidence-Based Programs and Practices. Reach Dr. Evans directly via email at evanss3@ohio.edu to learn more.