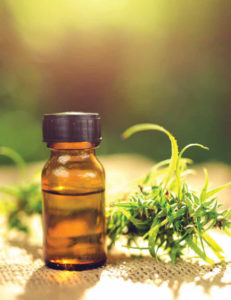 YOU'VE SEEN THE POP-UP ADS or you've heard a friend talk about CBD oil as an alternative treatment for ADHD. Every online community and social media platform seems to have someone praising the compound or offering to sell it. But what is it, and does it really have any proven benefits for managing ADHD symptoms?

Cannabidiol oil, most often referred to as CBD oil, is a product of the marijuana plant. The plant family is called cannabis, and cannabis products can include CBD oil along with smoked, vaped, or eaten products. CBD oil is just one of more than 85 compounds in cannabis and is regarded by some enthusiasts as having medicinal benefits.

It is not THC (tetrahydrocannabinol), the compound in cannabis that creates euphoria and delivers the "high" of marijuana use. CBD oil is not supposed to contain any THC, meaning the oil needs to be highly refined to make it suitable for use, and therefore is not a natural product. One reoccurring concern, however, is that some products on the market can have trace amounts of THC present, making them unsuitable for use by children and teens and by any adult concerned about possible addiction.

So what about CBD oil as an alternative approach for ADHD symptom management? Some claim that CBD oil, a cannabis product, can be used to treat the symptoms of ADHD. There is limited research showing an improvement for some people who have epilepsy and some people who experience anxiety who use CBD oil, so it is thought to also have benefits for people with ADHD.

What the research says

Researching CBD oil specifically for ADHD is relatively new. Some research has been conducted on smoked and ingested marijuana for ADHD, and the findings in general either do not indicate a benefit or are inconclusive. For both epilepsy and anxiety, there is more research that shows promise. A new medication made from cannabis for seizures caused by Lennox- Gastaut syndrome and Dravet syndrome was approved by an advisory committee for the FDA, but does not have FDA approval.

Not a natural product

Some advocates for CBD oil claim that its effects on the body are gentler and more effective than medications for ADHD because it is a natural product, made from a plant.

Contrary to some marketing claims, CBD oil is not made from industrial hemp plants. Hemp for fiber is harvested before the plant is mature, ensuring stronger fibers, and once a plant begins to form seeds, it stops producing cannabinoids to focus its energy into seed production.

Industrial hemp, because of these needs, cannot produce cannabidiol oil in sufficient amounts for commercial use. Instead it is often extracted from phytocannabinoid-rich hemp, which has ideally had THC bred out of it. This plant retains many of the characteristic of the marijuana plant. This plant is a recently developed variant of the cannabis family and only goes back to the 1990s. To the untrained observer, it resembles the marijuana plant.

CBD oil can be made from either PCR hemp or from the marijuana plant because of the similarity between the two variants. In the manufacturing process, the plant is broken into pieces and a chemical solvent, a grain or wood alcohol, petroleum, or naphtha, is used to extract the compounds in the plant. The whole material is decanted and the liquid is mechanically separated, drawing off the oils and resins. The solvent is then reused. There is also a process using carbon dioxide that bursts the plant cells and captures the oils and resins from through a series of filtering chambers. Other extraction methods use heated oils that "cook" both the oil and plant.

The oils and resins are then further refined to separate the CBD from other compounds; this could be a combined mechanical and chemical process. It must also be tested to make sure all THC has been removed, especially when the marijuana plant is used rather than PCR hemp.

The entire process relies on heavily refining the product to make it suitable for human consumption. And the more "pure" the product, the greater the amount of refining it must go through. So while synthesized from a plant, it must go through multiple mechanical and chemical processes to become usable and has very little resemblance to the plant it started from. The more "pure" the CBD product, the less natural it is–the final product does not exist in a natural form. You cannot chew on a leaf of a cannabis plant and receive any benefits from CBD oil.

Thoughts from an expert

John Mitchell, PhD, has heard all about ADHD and cannabis product use. He is a researcher and assistant professor at the Duke ADHD Program. He's not surprised by the current interest in CBD oil for ADHD symptoms and is not impressed by arguments in its favor.

"There is some efficacy in childhood epilepsy," he points out, "but when you look at the literature for anything else, especially psychiatric disorders, there's not strong support to say yes, this should be a go-to treatment, especially for ADHD."

He says the interest stems from people's desire to have more choices in treating medical conditions and in the changing perceptions on marijuana use. He points to several states that have made medical marijuana legal and a few states that are considering legalizing recreational marijuana use.

"This interest in CBD is coming out more broadly in these perceptions of lack of harmfulness and the changing perceptions of marijuana use in general," says Dr. Mitchell. "For a lot of different disorders—PTSD, ASD, some addictions—[some people] are interested because it might have therapeutic effects when you isolate the CBD. But those studies are preliminary. When you look at the published literature on CBD there's nothing—it's limited to one study."

He reminds anyone interested in CBD oil or cannabis products that there have not been the studies showing effectiveness or safety for these products when it comes to ADHD management.

"When parents or adults look into CBD oil for someone with ADHD, it's not just that there's a lack of evidence out there right now," he says. "There have been no treatment studies. There are no randomized trials that show it works. And there are other treatment options available for kids and adults with ADHD. These are unregulated products. If these are not well-regulated products, how do we know that we're really getting what's being advertised?"

"When parents or adults look into CBD oil for someone with ADHD, it's not just that there's a lack of evidence out there right now," says researcher John Mitchell, PhD, from the Duke ADHD Program. "There have been no treatment studies. There are no randomized trials that show it works. And there are other treatment options available for kids and adults with ADHD. These are unregulated products. If these are not well-regulated products, how do we know that we're really getting what's being advertised?"

What about the question of CBD oil being a more natural option than a medication? It comes from a plant, after all.

"Natural doesn't necessary means it's less harmful," says Dr. Mitchell. "If I were a parent, I would want it to be pure. Which means it's actually less natural, because it has to be refined."

Other considerations, he says, include how well-refined a CBD oil might be—are the THC and other potentially harmful components fully removed—and the fact that there are no longer-term studies on CBD oil use for children or adults. He adds that there are well-researched and effective non-medication treatment options, such as parent training and lifestyle adjustments, that are shown to be effective in managing ADHD symptoms.

There is also the question of CBD oil becoming a "gateway" to marijuana use by a young person. Dr. Mitchell says a young adult who took CBD oil as a child might not see the difference between it and marijuana use for symptoms management. Marijuana use has well-researched effects on physical and mental health and can make ADHD symptoms worse, he says.

"The literature shows there are harmful effects," says Dr. Mitchell. "There are impacts on cognitive ability, motivation. Especially for those who are younger and smoking more, there is an impact on IQ."

Leaping beyond the data

The research on CBD oil and other cannabis products as a possible intervention for ADHD does not show effectiveness for managing symptoms, and actually shows increased mental and physical health risks. There haven't been any studies on the use of CBD oil in children; neither have there been studies on long-term effects. So while some people are using it and have shared their results publicly, researchers and medical professionals have not found evidence that it is an effective treatment for ADHD. The research does not show that CBD oil works for ADHD management.

"We don't want to misrepresent things, and with CBD oil, it is getting misrepresented," says Dr. Mitchell. "When people say this works for ADHD, this is going way beyond the data. That's too big of a leap."

CDC.gov: It's Legal in Many States, So Doesn't That Mean Marijuana Is Safe?

NIH.gov: Effectiveness of Cannabidiol Oil for Pediatric Anxiety and Insomnia as Part of Posttraumatic Stress Disorder: A Case Report

NIH.gov: Cannabinoids in the Treatment of Epilepsy: Hard Evidence at Last?

PotNetwork.com: No, CBD Oil Is Not Made from Industrial Hemp, and Stop Saying That

Karen Sampson Hoffman, MA, is the webinar series coordinator and ADHD Weekly editor for CHADD's National Resource Center on ADHD. This is an expanded version of an article that appeared in ADHD Weekly.

A Novel Treatment for Severe Irritability: Exposure-Based CBT for DMDD

Stay Cool Through the Yule

Focus on One Cognitive Training Approach: An Interview with LearningRx