AS A PARENT COACH AND TEACHER TRAINER, I deal with the challenges created by electronic devices and social media on a daily basis. Parents struggle to set appropriate limits, kids have a hard time regulating their usage, and educators need to manage the balance between using these devices as tools and the unintended consequences they bring about. The middle school years are especially vulnerable, as most children have not yet learned to manage their emotions and regulate their behavior. It’s as if we have put a large bag of potato chips in front of someone and said, “Just have one.”

Delaney Ruston, MD, a physician and filmmaker, created the award-winning documentary Screenagers: Growing Up in the Digital Age to approach screen-time issues from an evidence-based perspective. There have now been many thousands of Screenagers film events. The film creates a compelling opportunity for parents and students to discuss the impact these devices have had on their lives. During one event where I moderated a panel discussion, a teenaged girl gave us all a powerful insight into her world. “I realized I was staying up till all hours because I was scared if I fell asleep before the group was done texting I might be missing out. I finally decided that nothing major could happen at 1 am, and I could wait until the next morning.”

They have looked deeply into the scientific literature and have found several concerning studies about academic performance and emotional well-being regarding cell phones in middle schools. To find solutions, the Screenagers team talked with dozens of middle schools that recently changed from allowing students to carry phones to adopting “Away for the Day” policies. They heard almost exclusively positive stories about the changes. And now, the Screenagers team has developed the Away for the Day (AFTD) initiative to help transform middle schools into cell phone-free spaces. 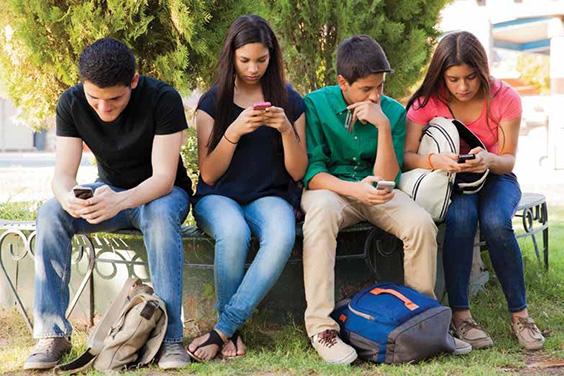 “Yes, cell phones can be tools—calculators, flash cards, etc.—and yes, it takes some energy to keep them put away in middle schools, but I am 100 percent convinced that for the sake of our students, it is worth it and truly doable,” says Dr. Ruston. Here are some further insights from Dr. Ruston.

I have heard from teachers and principals all over the world that even when there are rules around the use of cell phones in class, if kids have them with them they are sneaking on to them and are not staying on task or listening in class. Who can blame them when they have access to games and social media right in their pocket? In Screenagers, I feature a high school student who says she has to go get help after school because she finds it too hard to stay off her phone in class. For Away for the Day we are specifically addressing middle schoolers, because they are biologically more prone to less impulse control and are developmentally even more pulled to feel connected to social peers than high schoolers.

What has been the impact of phone usage on student’s academic performance?

There are been many studies, but this one from 2017 is particularly relevant. Participants were asked to turn off and silence their phones while they performed memory tasks. Some were allowed to keep their phone in their pocket (still turned off the whole time) and some were told to put it in the other room. Those who had the phone with them did significantly worse. The mere presence of smartphones reduces available cognitive capacity. In other words, the attention and energy it takes to not check a phone seem to cause “brain drain.”

What have you found to be the most significant emotional impact of students using their phones during the day?

While cyberbullying gets a lot of attention, too many students face micro-emotional hits when they are left out of group chats or see photos that trigger “a compare and despair reaction.” When this happens during the school day, it can make it very difficult to focus on schoolwork.

Studies have shown increasing rates of depression in adolescents, especially in girls. Meanwhile, youth who spend more time spent on social media have a greater likelihood of exhibiting depressive symptoms. Importantly, the same study finds that that face-to-face time with friends strongly correlates with less depressive feelings. Creating environments that promote such interactions is a smart public health move.

What about parents who are concerned about reaching their children during the school day?

Our data shows this is not the case. More than 80 percent of middle school parents do not want their kids to use cell phones during school. When parents help their kids plan their days without text messages, they help them to develop valuable executive-functioning skills.

Some people feel that phones are such a part of life that students need to become skilled at incorporating them into their lives. Shouldn’t we let them learn to manage themselves?

We need to help our kids and teens develop these skills but having the “candy” of games, social media, etc. right in their pocket all day just isn’t a fair ask of our middle schoolers, given where they are developmentally. There is plenty of science to support that the part of the brain that is responsible for self-control is not fully developed until kids are well out of middle and high school. It is our job as parents and educators to help them build good habits and not to overtax their self-control abilities. It is true that many middle schoolers do keep their phones away in class, but many do not—and this is disruptive to both the user and the students working so hard not to check their phones.

Studies on Impacts of Screen Use

• The Away for the Day Initiative

• Monitoring the Future, A Continuing Study of American Youth

Cindy Goldrich, EdM, ACAC, is a mental health counselor, certified ADHD coach and teacher trainer. She is the author of 8 Keys for Parenting Children with ADHD and the creator of the workshop series Calm and Connected: Parenting Children with ADHD©, designed to teach parents and caregivers how to manage and support their children’s unique needs successfully. Her workshops are offered nationwide by her staff of trained ADHD parent coaches. She is also a recognized keynote speaker and provides professional development for school districts nationwide, addressing how ADHD and executive function deficits impact children and how to help boost behavior and performance in school and at home. Through her ADHD Parent Coach Academy, she trains other professionals to become ADHD parent coaches.

ADHD & Rarely on Time? It’s Not Just About Time Management

Chronic Constipation: The Other ADD

Stressful Experiences and Risk for ADHD

Spontaneous or Impulsive? How to Know, What to Do

What Works for You in the Workplace?