Many people hold that long-standing and widespread belief that only boys have ADHD—but it is a myth. 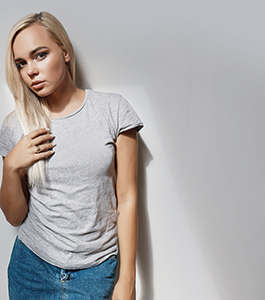 For almost a century, the majority of clinic referrals were for young hyperactive boys who were impulsive and unmanageable. Researchers used the data describing the behaviors of those boys as the basis for the early diagnostic criteria. Since hyperactivity was identified as the hallmark, only the rare young girls with behaviors most similar to those boys could be diagnosed. The majority of girls with ADHD experience primarily inattentive symptoms which did not meet diagnostic criteria. As a result, diagnosed girls were vastly outnumbered by diagnosed boys.

When those young boys finally reached puberty, their hallmark symptom of hyperactivity gradually tapered off—to the extent that it was believed that the disorder resolved at puberty. As a result, the picture of ADHD emerged as a disorder limited to childhood, predominantly affecting hyperactive boys; it was formally classified as a disruptive behavior disorder of childhood in the Diagnostic and Statistical Manual (DSM) until 2013. That understanding of ADHD as a male-dominated childhood disorder persisted for decades, during which time girls were not considered for diagnosis.

We now know hyperactivity tends to diminish with age, and that ADHD does not resolve at puberty. In fact, contrary to the belief that ADHD was solely a childhood disorder, we now know that ADHD persists into adulthood in the majority of cases. In 1980, revamped criteria allowed for the possibility of inattention without hyperactivity, finally facilitating diagnosis of predominantly inattentive girls, whose behaviors least resembled those of hyperactive boys. This change clarified that an ADHD diagnosis no longer required the presence of hyperactivity. For the first time, inattentive girls were just as likely to be diagnosed as hyperactive boys. Theoretically.

Despite this significant revision, assessment scales and diagnostic criteria have continued to skew toward more male-based behaviors. While the new criteria were designed to be more inclusive, hyperactive boys continued to be selected as subjects for the majority of studies. As a result, findings describing boys with ADHD continue to be the standard against which girls with ADHD are compared. When studies do include girls, they tend to be those exhibiting symptoms more characteristic of boys. It is not surprising, then, that most studies find no gender differences in the symptoms of ADHD. The unfortunate reality is that, despite comparable symptoms, girls (and women) with ADHD experience more functional impairments and face starkly different long-term outcomes than males with ADHD.

Prevalence ratios of boys to girls with ADHD have decreased significantly over time, from about 25:1 to about 3:1 today. The prevalence estimates of girls have been dramatically affected by gender biases. However unintentional, identification challenges, referral rates, assessment scales, and diagnostic criteria reflect entrenched gender biases that continue to impede girls’ diagnosis.

Girls with ADHD thwart easy identification because they are typically less disruptive, aggressive, impulsive, and hyperactive than boys with ADHD. In addition, girls’ tendencies to mask their difficulties allows them to appear less impaired, but at the cost of being assessed as not needing help. If clinicians are unfamiliar with their subtle inattentive gender-typical behaviors, those girls may be overlooked. In fact, girls’ chances of diagnosis improve when they exhibit more gender-atypical symptoms, like hyperactivity, impulsivity, and oppositionality. Despite similar levels of impairment, even parents and teachers are more likely to refer disruptive boys for evaluation than compliant girls.

Girls who do not meet DSM criteria run the risk of being misdiagnosed and subsequently treated based on easily observable symptoms like anxiety and depression. Whether overlooked or misdiagnosed, girls tend to receive an ADHD diagnosis an average of five years later than boys. Since diagnosis required the presence of symptoms before age seven, girls were excluded for the most part. In 2013, when the diagnostic cutoff was increased to age twelve, girls’ diagnoses skyrocketed. This surge occurred because most girls with ADHD exhibit more prominent symptoms after puberty, following the release of estrogen. Today, hormonal modulation of girls’ ADHD symptoms is an emerging area of research; the scientific journey continues.

If you are confronted with the myth that only boys have ADHD, refer them to our scientific evidence: Girls, once excluded from the conversation, were overlooked—because girls with ADHD look very different from boys with ADHD.

Girls and boys can have ADHD—and that’s a fact.

Ellen B. Littman, PhD, a clinical psychologist licensed in New York State, attended Brown University, Yale University, the clinical psychology doctoral program at Long Island University, and the Albert Einstein College of Medicine. She has been involved with the field of attentional disorders for more than thirty years. In her private practice, she focuses on a high IQ adult and adolescent ADHD population and specializes in identifying and treating complex presentations of ADHD that may be misinterpreted or overlooked. Described by the American Psychological Association as a pioneer in the identification of gender differences in ADHD, she has particular expertise with issues affecting women and girls. She created a video training program on women with ADHD for the American Medical Association’s continuing education program. Her understanding of neurodiversity is informed by her training in neurobiological, cognitive-behavioral, and psychodynamic perspectives. She is well versed in the treatment of co-occurring conditions, such as anxiety, depression, bipolar disorder, and PTSD. Internationally recognized and published, Dr. Littman is coauthor of the book Understanding Girls with ADHD and contributing author of the books The Hidden Side of Adult ADHD, Understanding Women with ADHD, and Gender Differences in ADHD, among others.

I-PCIT: When Help Is Needed Now

Coping with and Recovering from the Pandemic: Key School Issues for Kids with ADHD

Calling All Students, We Need You!

“If This Is Supposed to Be Easy, Why Is It So Hard?”

What a Difference a Year Makes: The 2021 Conference on ADHD