Worried about the traditional college route? Learn about the positive realities of this option for students with ADHD.

SAM COMES FROM A FAMILY of high achievers. Everyone in his family who is older than him has gone to college, and everyone who is younger is expected to go as soon as they graduate from high school. School has always been a challenge for Sam, however, and something he really doesn’t enjoy. The work itself is not hard for him. But, the structure and focus that is required to complete all the assignments and get them turned in on time has resulted in poor grades that don’t reflect his ability. He also doesn’t think that his test grades reflect all he knows in most classes, because he gets so distracted when he is taking exams and never has time to finish them.

Right now Sam’s ADHD is winning, and he doesn’t know what to do. He loves the idea of going to college. Being away from his parents, not following their rules, and going to all the college parties is pretty exciting. However, when he thinks about what will be required of him in the classroom, he can’t imagine being successful or even being accepted. This is especially true of the selective college that most of his family members attended. In fact, when people keep asking him what he wants to be when he “grows up,” he hates to tell them that he still wants to build houses. He’s wanted to do that ever since he played with Legos as a kid. What options exist for a young adult like Sam?

An overlooked route to success

Many students, like Sam, begin college immediately following high school simply because that is what everyone in their family does. Often, the attempt at college directly out of high school proves challenging for young adults with ADHD. According to the National Student Clearinghouse, three out of ten high school graduates who go to four-year colleges have not graduated within six years. One reason is a lack of well-developed executive functioning skills—the ability to plan, organize and implement tasks as they relate to managing college demands.

For years, studies have shown that students with disabilities are less likely to complete a bachelor’s degree than those without a disability. However, students like Sam are often not given career advice or guidance as it relates to options other than a traditional bachelor’s degree route. Parents want their children to be successful, and continue to push for a bachelor’s degree or college route, getting stuck on seeing a four-year degree as the only path.

Going to college without a plan is scary, however. It can become just a detour, since high school students are programmed to go to college with a career plan in mind. While students like Sam are struggling in a college classroom, they are not seeing that there may be a shorter and less expensive training route to a high-paying job. In fact, there are many positive correlations between careers in the trades and the young adult with ADHD.

Maybe Sam would work for a construction crew right out of high school. The visual, auditory, and hands-on learning provided in that environment could be more stimulating for him as a learner affected by ADHD. He might also find a mentor in a more experienced employee who would take him under his wing by answering his questions and providing direct feedback.

Direct link from education to career

Another consideration for the student with ADHD is that there is a more direct link from education to career for the individual in a trade. This can ensure more ease in setting goals and seeing progress toward the goals. The Bureau of Labor Statistics shows that in 2016, only 17.9 percent of persons with disabilities were employed, in contrast to 65.3 percent of persons without a disability. This makes the direct link to employment that much more powerful.

Also powerful is the shortage of individuals in skilled trades. This has been confirmed by the talent shortage survey completed by Manpower Group, which indicated in 2016-17 that for the sixth consecutive year skilled trades positions are the hardest to fill globally. 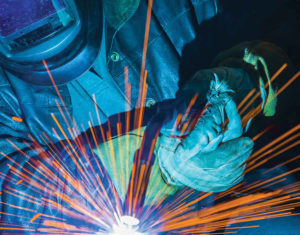 According to a survey completed by McGraw-Hill Construction, it is predicted that the top five trade areas with the greatest feared skilled labor shortage are:

Additionally, the National Electrical Contractors Association notes that 7,000 electricians join the field each year; however, 10,000 retire. It is anticipated that by the year 2020, with the baby boomer generation retiring, there will be 31 million jobs left vacant, leaving a 75 percent shortfall of qualified skilled trade workers.

According to the Bureau of Labor Statistics, along with healthcare and personal care, construction jobs will account for one-third of all new jobs through the year 2022. The US Department of Education finds that across the next five years, there will be 68 percent more job openings in the infrastructure-related fields, with a shortage of workers to fill them.

Unfortunately, many young adults with ADHD and their parents often have negative perceptions about the skilled trades (electrician, carpenter, painter, welder, and more). They see these jobs as hard physical work that offers no chance for advancement or financial security.

The Bureau of Labor Statistics tells a different story for skilled laborers. In May 2017, the average annual wage for electricians was $57,910, while the average wage for carpenters was $49,630. The highest paid ten percent can earn $92,690 as electricians and $80,350 as carpenters. Subsequently, the increased shortage of workers in these fields also pushes the wage earnings up.

This data indicates that financial security can be found by working in the skilled trades. In fact, not a day goes by that educational institutions across the country don’t get calls from prospective employers asking who is already trained and ready to go to work. The ability for a young person to receive direct training and transition right into a lucrative career path is a win-win.

Which path for your child?

As a parent of such a young person, how can you help? First, talk to your son or daughter! Find out what he or she wants to do in the future, what goals and dreams are meaningful to him or her. Also, talk to the high school guidance counselor to find out about alternatives in your area and to locate quality career counselors or aptitude assessments.

Many new studies suggest that career guidance activities, including those that include careers that do not just require a four-year degree, start as early as grade seven. Expose this young person to options where job opportunities are numerous. Let him know that you will be there to help determine what is required for each option. Let her know that you are open to what she really wants to do even if it is not what is traditionally expected in your family. If there is a trade that sparks their interest, many young adults can be fulfilled and successful at this time in their lives without a degree. And, remember, even though a traditional college route is not the path right now, that does not mean that in his mid-twenties Sam will not start a business degree program so that he can one day run that construction company he started out working for. No matter the path, with your support, you can help your child to build a solid foundation for the future.

Jennifer Phillips, MS, CRC, is the associate director at OPTIONS Transitions to Independence in Carbondale, Illinois, which is affiliated with the Brehm School for students with learning disabilities. Instrumental in creating the program she now co-directs, she helps post-high school students with disabilities locate internship and paid employment opportunities and provides transition services to empower students to recognize and optimize their lifetime potentials. In her work as a disability and employment advocate, she also serves on the Center for Independent Living, the Illinois Association of People Supporting Employment First, and the Brehm School Foundation boards. A nationally certified school psychologist, Julia Frost, MS, has been the director of the Jones Learning Center at the University of the Ozarks since July 1994. The center provides a comprehensive support program for students with learning disabilities, ADHD, and autism spectrum disorder. She was its director of assessment from 1986 through 1991. Prior to that, she worked for eight years as a school psychologist in Arkansas public schools and two years as a music and English teacher. Frost has served as the president of the Arkansas School Psychology Association and as a board member for the Arkansas Association for Higher Education and Disability. She serves as the chair of the adult topics committee for the Learning Disabilities Association of America.

The Gifted Child with ADHD

The Genetics of ADHD