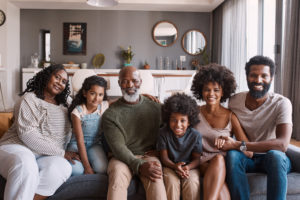 In honor of Black History Month 2021, CHADD will host a series of important conversations. Our theme for these special activities is Building a More Culturally Sensitive World: Awareness. Listening. Understanding. These three words are the foundation of how CHADD will lead the fight. Begin learning about ADHD in the African-American community with these excerpts from recent All Things ADHD podcasts, edited for length and clarity, and join us for much more.

Not every community in the United States has the resources available to help individuals and families cope with the challenges that come from ADHD. What are the consequences of late diagnosis and treatment for ADHD in underserved and disenfranchised communities? Brandi Walker, PhD, (MAJ, US Army), shares her insights about what healthcare provides, parents, and educators can do to decrease health disparities. Dr. Walker is a clinical psychologist at Womack Army Medical Center at Fort Bragg, North Carolina, who works directly with service members and their families.

Key takeaways:
One of the things that we're focusing on is what we will call health disparities. Those are barriers to diagnosis or barriers with assessment or treatment, and they're based around different factors, such as not being able to have access to care, or access to opportunities for care or access to resources. A lot of those barriers are because of socioeconomic status. They may be because of demographic differences, such as race or ethnicity, maybe age or disability status. So, there are several reasons that kind of contribute to health disparities and why they continue to exist.

There are challenges with systems in terms of maybe school systems, maybe programming, maybe communities, access to those resources that would alternatively provide the care—so, not being able to get a diagnosis, for instance, for African Americans. Some African-American kids will get a diagnosis two years later than their counterparts, which means that they're academically behind. They may have a learning disability going on as well. A lot of times with ADHD there's also comorbid anxiety or depression. So, it's having all of those challenges that you typically wouldn't have if you weren't demographically differentiated in terms of resources and support.

For children with ADHD, diagnosed or undiagnosed, the rate of high school dropout is 35%. Most kids get diagnosed at age seven, but an African-American child may not get their diagnosis until nine. So then, it's a two-year loss of academic achievement, or they may be minimally achieving when they could have been achieving well beyond what they actually are getting because of the diagnosis. That same child, as they're moving along to the next grade and next grade, they're just kind of falling behind, falling farther behind, and the ability to get them where they're supposed to be is such a larger challenge than had they been receiving the care all along. And so those are the students who probably are at a greater risk for dropping out of school or disconnecting. Low self-esteem is another impact.

The issue of health disparities is very real. We see it all the time and just understanding, raising awareness that it does happen, and that there is something that every person can do. Practitioners, teachers, everybody can be involved.

Undiagnosed or untreated ADHD in African-American youth creates a higher risk for dropping out of school, abusing substances, and engaging in delinquent activities that may lead to incarceration. ADHD advocate Evelyn Polk Green, MSEd, discusses options and strategies for families. An adult with ADHD who has two adult sons with ADHD, she is a past president of both CHADD and ADDA.

Key takeaways:
I think one of the biggest barriers that's still around is stigma. I've been doing ADHD advocacy for well over 20 years. It was stigma then. It was understanding, and stigma both within the African-American community and then stereotypes about kids and adults of color from outside of the community. I can recall being told that kids in the city didn't have ADHD, they had behavioral disorders. So, we get those kinds of stereotypes. And then, the African-American community has the burden of a not-great history with the medical community in America. So, those are the kinds of things that are in our collective history, in our collective memory banks, that make it difficult to be able to accept mental health issues for a lot of families.

It's starting to change very slowly. One of the reasons it's changing is that there are more and more people willing to speak up and speak out, like myself and others who are willing to say, "I have ADHD and I'm proud." There's also the fact that we hear more and more about depression and anxiety and other mental health issues, like PTSD, in the media, on television, on the news. So, I think it's getting better, and that's also affecting the African-American community.

I've seen some change, so it's not completely hopeless, but not the kind of change that I would want to see. A big reason that I got into the advocacy and worked with CHADD and with ADDA for so many years is because I wanted to see a difference and to erase some of that stigma, especially in communities of color. That had been my goal. That's why I tell my story, is because I'm hoping that'll help reduce some of the stigma. But it's still not the kind of change that I would like to see.

Parents still struggle with medication issues in the African-American community. I get that, but 20 years ago it was, "I'll never put my child on medication." And now I hear people willing to listen and to think about it and consider it. So, things have improved. They're willing to say, "My child might have ADHD," or "I may have it." So things are improving, it's just that still, we have so much work to do.

Nekeshia Hammond, PsyD | Overcoming Myths and Mistrust About ADHD in the Black Community

African-American parents often question the validity of their child’s ADHD diagnosis. Nekeshia Hammond, PsyD, explains what parents need to know about the elements of a comprehensive evaluation for ADHD. She discusses common myths about ADHD in the Black community and explains why healthcare professionals and educators need culturally competent training.

Key takeaways:
I really feel that if possible, parents should think about getting a comprehensive psychological evaluation. Some providers are taking five or ten minutes only to hear about symptoms of inattention. The CDC has said that with the majority of kids who have ADHD, there's also something else going on that needs to be addressed as well. So it's really important to have a comprehensive evaluation for ADHD and other things that could be impacting this child.

Ideally, a comprehensive evaluation should take a couple of hours. Sometimes children are gifted and they're so bored in the classroom that they look really inattentive. Or sometimes at the opposite end, children's IQs are lower so they may just be struggling with learning. Looking at that, and looking at ADHD measures and depression, anxiety, and trauma measures—all of these things that impact—it takes a couple of hours to do that type of assessment versus a five-minute appointment where a parent says to a physician, "My child's struggling with attention."

There's this unfortunate aspect, particularly with African-American youth, that for some families ADHD may be underdiagnosed because of the stigma of mental health, the worry and concern about the label "ADHD.” But then on the other end, sometimes it's too quickly diagnosed. I've had children that have come into my office and literally have said that they are afraid of the racism they're experiencing at school from other students. These are real concerns and affect attention and concentration. But I've seen it go both ways. It's definitely a real concern to properly evaluate for ADHD in Black youth.

I would hope that schools will really start to look at how to have more cultural competence. Every child obviously is just not the same as far as how they learn, as far as their backgrounds, as far as their racial and ethnic identities; there's unique things for different children. This educational system will never, ever work with a cookie-cutter approach.

My hope is that more schools will take the time to recognize how important it is to be culturally competent. To understand trauma-informed education, to understand the unique needs of Black youth, Hispanic youth, and kids from all different backgrounds. And for the educators to learn and be aware of their own stereotypes and biases that they bring into the classroom, because all of this affects youth—especially if a child has ADHD and is in need of special education services.

I found that in some schools that have a greater need of cultural competence, there's a ton of services in the community, but in the school itself, some families have no idea what's available to them. We have to bridge the gap, and that comes with understanding culture, understanding needs, understanding mental health. That's really where the school system needs to start if we're going to make a change and help these youths.